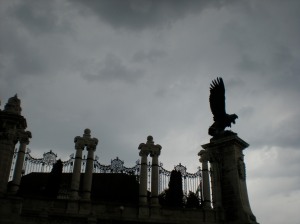 This morning I had one of the best and hardest runs of my life.  I’ve taken some time away from running seriously, mostly to recover from pneumonia, though since feeling better I really haven’t run outside except for a few times in Hilton Head pre-arrival here.  Those of you who are runners know that when you’ve taken some time off, whether it be one month or one week, it can be scary to get back onto the road.  But the body is a remarkable instrument and I think for most runners is apt to take on the old forms again.

So today I decided it was now or never for me to get back to the serious side of my running life and headed out in the cold and somewhat dreary morning for a steady 5K.  I started on the quiet walking path that looks out over the hills, which is a good place to start because there are almost no people except locals walking their dogs.  And because it was raining, I made it all the way to the edge of the castle (in front of the National Gallery) and to the little lookout point without seeing many tourists at all.  Now as I’ve mentioned several times, the castle is at the top of the hill, so to get anywhere you have to go down.  At the edge of the gallery, I slowly walked down the scariest, wet, spiral staircase to the bottom level.  I had never been that way before and was prepared to encounter anything at the bottom, including a locked stairgate or (driven by my subconscious american fear) a palinka-crazed murderer.  Alas, I was all alone at the bottom of the castle on a thin cobblestone path lined in pines.

A peaceful rain was still falling, and after about another three minutes of running I came to the most amazing site, and probably one that no one really gets to see unless you really lead yourself off the usual tourist path:  the iron-cast door of the castle, which was open just enough for me to run through and out onto the busy Buda streets at Clark Ádám tér.

There is one path that I’ve found back up to the castle that is about half steep incline and half stairs, which is much better than all stairs, trust me, though almost at the top my heart nearly exploded and I was wheezing like an Olympic runner in Beijing.

Now as far as the tourist crowds go, the opposite logic seems to hold true when determining how many people will actually be touring around.  For example, you’d think that Sundays would be a slow day for tourists.  Or early mornings.  Or late late nights.  Nem.  This morning was another perfect example of counter-tourist-logic.  Rainy.  Cold.  And more tourists than I’ve ever seen.  Most of my run back through the district was spent jumping into the streets and dodging cars (and let me emphasize it is NOT easy to run on wet, cobblestone streets) because the sidewalks were clogged with groups and their gigantic American golf umbrellas.  Like American-sized cars, America-sized umbrellas do NOT fit on these streets.  The people were bumbling into each other, some getting poked, some getting smashed against the bricks.  It’s a miracle they could catch anything at all the tour guide was saying.

Still, with a mixture of pride and embarrassment it occurred to me how many thousands of photographs I will be appearing in once they are downloaded or developed.  They’ll say, “Honey look, here she is again, that crazy Hungarian girl running in the rain.”

And really, I can’t think of better motivation to get up in the morning and put in the hard, local miles.

3 thoughts on “and getting caught in the rain”

Leave a Reply to haley x