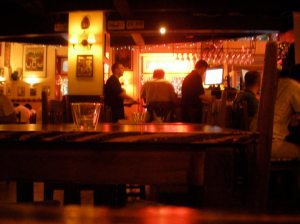 Now, it may surprise you to learn that Hungary (and the general vicinity of Central Europe) is not exactly a place where you will commonly find Mexican food.  In fact, it seems that most Hungarians tolerate salsa to mean a barbecue sauce peppered with a few diced tomatoes, a chopped up onion, sometimes a paprika (though don’t hold your breath) and little dip of honey.  Well, it’s usually red.  So it took some poking around the ex-pat food blogs to get word of Iguana Bar & Grille, which is a GENUINE hangout of American Mexican-food-loving expatriates.   And since I have lived in both rural Indiana and rural Georgia, two places where you are bound to find a roadside cantina on many side streets, I can affirm that Iguana comes very close to the tastes of home.

With an odd mixture of Diego Rivera prints hanging on the walls, a large bar dimly lit by colored torches, and astonishingly cheap shots of Patrón (700 HUF = a little over 4 USD), it had the old, familiar feel, which only enhanced the enjoyment of eating fresh salsa, chicken enchiladas, and Texas beef tacos. 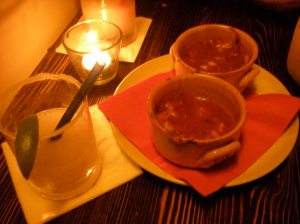 And as a quick note, when you are scouring menus in Hungary, you are likely to find beef/steak/burgers with the modifier TEXAS.  From my limited menu reading experience here, it still seems as though TEXAS denotes that you will receive actual beef, from a cow, a cow in a field with beef on its bones.  As opposed to that mystical hybrid Hungarian cow in the field with a mixture of pork, lamb, duck, and sausage (which comes already ground together in patties) on his bones.  Either that or it’s meant to denote the size of the portion, which only sadly goes to show that everyone in the world—even in Hungary—where many women don’t even know who Oprah is—understands that IT’S BIGGER in TEXAS. 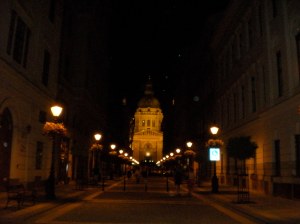 After Iguana, we went on our way to one of the best outdoor squares in Pest at Szent István tér  overlooking Szent István Bazilika.  Even though it’s not the cheapest place to have a nightcap, Café Negro still has the best leather outdoor seats in the tér.   Lit solely by the Bazilika and the low yellow hues of the square lamps, the whole experience seems to point back to an older time, a slower time where people still strolled.  Where they went somewhere without going anywhere.

I took this video at the dimly lit Café Negro at St. Steven’s square. You’ll also notice that unlike at the Castle District, you hear a lot of Hungarian spoken here.  Probably a lot of people who don’t know anything about Hungary, or anyone who speaks or spoke Hungarian, assume that the language sounds like Russian or a Slavic language like Czech.  This is not the case however.  The language is extremely melodic, and native speakers have a way with syllabic emphasis that is really very beautiful.  Unlike English, it’s not a hard sounding language, as you might think. Even when Hungarians get heated and sassy (which they often do), the language can be very lulling.

By midnight, there were at least a hundred people around the square waiting for a table, and satisfied as we were that we had gotten our fill of the moon and cool air, we paid the bill and left for the hotel.

And for tomorrow:  The conclusion of the whirlwind weekend and the fascinating relationship between hangovers, maniquins, and folkart.