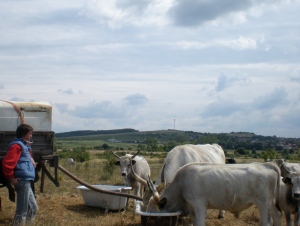 Sharing a boarder with southeastern Slovakia, Nógrád isn’t a big Hungarian town.  It’s not a town at all, actually, but a village, a real old-Europe village where the shadows of older times lurk much closer than in the bigger cities where there are occasional cobblestone reminders.

Just before daylight the village roosters were awakened by the circadian rhythms and began their territorial singing, and soon after the daily announcements from the loud speaker.  I was told that they announced twice that the pharmacy would open on Friday from 10:30 until 11:30.  Apparently one hour is all that is needed for prescription pick-ups and vitamin refills.  These announcements were strangely soviet to me, though after a few days I warmed to the rustic simplicity and resolved that they were, like most everything in the village, quietly idyllic.

I suppose if you are an average Midwestern American like I am, and you were suddenly transported into Nógrád, you might feel some familiarity.  The creeks, marble arches, honeysuckle in bloom.  German dogs sunning themselves in the grass next to the peach trees.  The woodland and the pastures, the apple groves.  People harvest various fruits and vegetables, others ride bikes, gather flowers, run for the train or the ice cream truck.  But the pace is distinctively small town European.  The mayor, for example, makes
mákos rétes (poppy seed strudel) and delivers a few portions to the family I stayed with.  The mayor.  And grandmothers are always calling the grandkids to their homes to eat the ice cream they picked up from the confectionary.  Hungarian kids are always getting ice cream rewards.  And Túró Rudi. Of course you’d be hard pressed to find the spectacular ruins of a castle on the top of an average Ohio hill.

I stayed with the family for a week and organized English lessons for the two eldest children (15 and 14).  And when we weren’t playing tennis, touring the father’s vast property on quads, riding horses, or eating Hungarian specialties to the point of excruciating pain, we talked about American gossip rags, celebrities, pop art, comic books, cooking, and American sports.

I gave them vocabulary lists and they actually gasp made notes on them.  And doublegasp listened to me and asked questions.  And triplegasp actually used the new words.  And seriously, for you educators out there, when was the last time your student’s mother interrupted your lesson to bring you ice cream bars and raspberry syrup for the sparkling water?

As I look through all of the pictures I took over the week, I really appreciate even more the quaintness of these little towns outside of Budapest.  And while for some a place like Nógrád is just a place for a summer or weekend home, it’s another example of the kind of feeling I was hoping to find when moving here.  Unspoiled by the bus exhaust and tourist mobs, it is simple, pastoral.  A place where you can write, and actually hear your own words coming back to you.

It’s the end of blackberry season.  This morning the rooster’s lungs seem strained in his cockled melody of morning.  The plums are so fat the branches bow to the grass, and honeybees are wingside hoping to suckle the warm nectar drip.  The family is still sleeping, as are the farm workers though the young mare needs tending in the barn.  The village dogs that spent the night moon-howling are resting now in thin alleys of morning sun. Dry creek beds crackle as the train vibrates past.  Split wood shifts on the piles in the north stables. And on the distant hill, morning is as green as time here, is as new as the words for it.  Everything is alive and resting.  The empty wine cellars dug cool into the hills, the peach pits mixed with pebbles on the side of the lake.   Everything is resting and everything is moved.  The pottery wheel, for example, turned slowly by wind.  The stones of the gunpowder-ruined castle with no memory of that season of lightning.