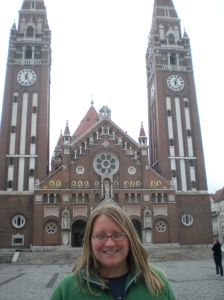 On Saturday I was in Szeged, the city of sunshine, during a cold and mostly atmospherically dreary weekend.  But I found it to be that much more peaceful, and that much more like your average hometown than when I was there a few months ago.  (That is if your hometown has countless colorful—if not Mediterraneanesque—shops and cafes, the architecturally inspiring Dóm square, a handful of confectionaries where university students and young couples enjoy cappuccinos and ice cream and late night conversations.  A hometown that can cite its first inhabitants as mammoth hunters around 23,000 BCE, and on a bit, became a darling of the Roman Empire, stood up to a clash of Turks, was washed-away by the governing river (down to 5%) and then built up again, and was recently awarded the Europe Prize, which is the “highest distinction that can be bestowed on a European town.”)  That kind of hometown I mean.

But it had a quieter feel than it did in late July and early August.  Probably because the 15,000 University of Szeged students were back to their studies, along with the other city-folk returned from summer holidays.  The distinguished elders were again gazing out their flat windows, sweeping leaves from the stairways.  Paprika was drying in widows and the Pick factory was operating at full steam.

On Saturday night, after ice cream and kávé, we walked around town as the rain sprinkled down.  But we weren’t the only ones undeterred by the weather.  People were still everywhere talking, gossiping, taking pictures of József Attila and other heroes in sculpture form.  A group of young women started dancing next to the fountain in the city center, despite the wind gusts blowing the water in every direction.  Brahms’ Hungarian Dance No. 5 was broadcasting from the speakers.  Another young woman, walking alone, sauntered next to the marble stairs and started to dance as well.  When we turned around, we saw a man swaying  with his small dog.  It was utterly bizarre and utterly perfect.  The season, the un-sunned city was casting a spell.

On Sunday, we went to the Votive Church (of Our Lady of Hungary–Magyarok Nagyasszonya).  It’s a twin-spired church on the Dóm square, and for a few minutes we were entirely alone there.  The mass had ended about an hour before, and perhaps the weather, or perhaps just luck with silences recently, no one was touring around and taking pictures.  I had a chance to sit in a back pew and just gaze, breathe, ponder. 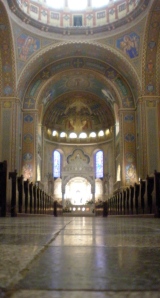 Building on the cathedral, which can accommodate 5,000, started in 1913 (is part of 20th century Hungarian Ecclesiastic architecture inspired by Italian Romanesque cathedrals) but wasn’t finished until 1930, on account of WWI).  I didn’t take many pictures of the exterior of the church, but both exterior and interior are ornamental and symbolic, depicting everything from apostolic images, ancient elements and trades, papal seals, and relics of the saints and monarchs.

Whether the light inspires piety, a generous heart, or a resurgent historical curiosity, it’s easy to see why people would want to visit it, or are proud to call it home.