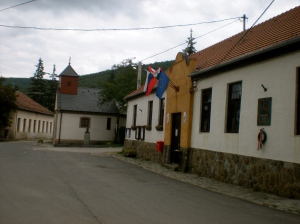 On Saturday the plan was to stay close to Budapest, to do some museum tours or hiking, depending on the weather.  Despite the overcast skies, hiking was the winning activity.  I’m not sure about anyone else, but coming from such a rainy, cloudy hometown, my inclination is to always put off museum-ing until fall has dried up and fallen off.  And even though I’ve heard it’s quite beautiful, dry and sunny here during the winter months, the cold alone can drive anyone indoors for Late Renaissance and Baroque art exhibits in the National Gallery. 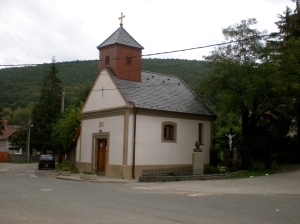 So we head to Pilisszentlászló, a town about a half hour from the city (by car), though small enough to avoid most listings in guidebooks.  It is close, however, to the very tourist-popular Szentendre and Esztergom, both of which I visited this summer.  Near the Danube and Slovakia, the little town is known around Budapest as a nice afternoon getaway for a light hike and leisurely lunch.  I saw one church, one pub, one restaurant, and one hotel, and though there are probably a few more, there was a certain charm in the one-onlyness of it. 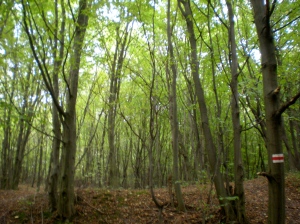 Part of the national forest, there are organized hiking trails (though not well groomed nor closed to small off-road vehicles—so if you hear the rumbling of an ATV engine, it’s best to move toward the side of the path or embankment).  The indicator that you are on the right trail is a small painted sign on a tree or two.  But even though some where clogged with mud flow or downed pines, the paths were well worn, and for the most part it was clear that you’re heading in the right direction. 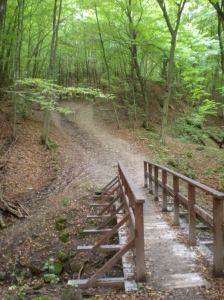 Even with the clouds, the green in the trees were extraordinarily vibrant.  We passed a few families who had small children slung into those kid-carrier backpacks, and the whole atmosphere was slow, open and fresh.  We saw several fires at the entrance of the forest, and people circled around them with small grills and tents.  For the camping types, I imagine it is a lovely fresh-air refuge from the city, a great place for a fall weekend or day trip. 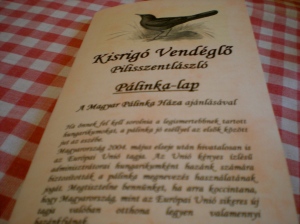 After a little hike, we had a late lunch at the well-known restaurant there overlooking the hills: Kis Rigó Vendéglő.  It was a real local joint, though completely crowded even at 3pm.  A place to get traditional fare like cauldron-cooked Hungarian gulyás, dark beers, and hearty meat dishes.  And to add a little spice, they had a full pálinka menu, though I wouldn’t recommend a tasting before a hike. 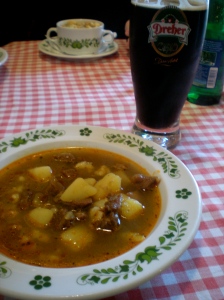 Overall the trip combined some of the best of the things I’ve discovered here—a pleasant atmosphere combined with the generous spirit of locals.  And as the fall rolls forward, I imagine that Pilisszentlászló will come even more alive with the changing leaves on the paths and campfires of city-folk who for a few hours can escape the business of Budapest. 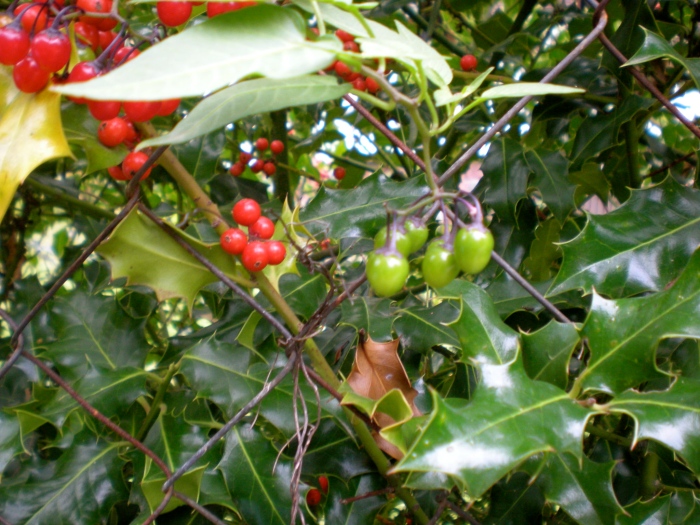 Leave a Reply to mary x