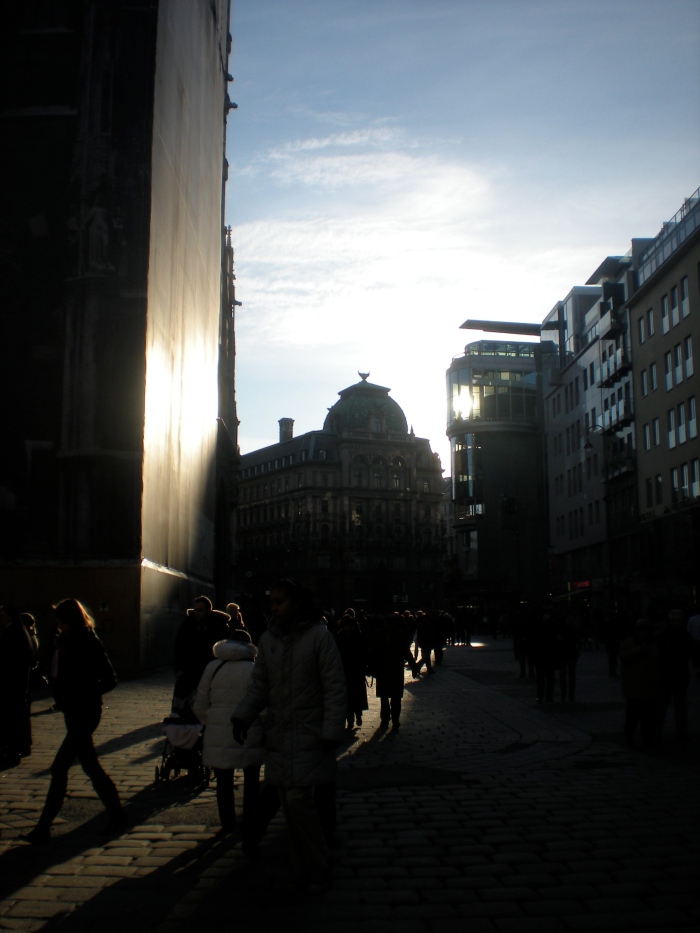 Yesterday I went to Vienna, Austria for the day.  It was beautiful outside, warm and sunny, and so we decided to make the quick, two-hour drive.  Wien or Bécs, as it’s called in Hungary, has almost exactly the same population as Budapest, though when I was there, it really seemed bigger.  Budapest is the 9th most populous city in the EU and Vienna is the 10th.  First being London, of course, and for reference, fifth being Paris.   Though it was ranked as having the 2nd highest quality of life, compared to Budapest which was ranked 74th, just under Rome.  And Cleveland.  But I’ll get back to that.

It was a beautiful city.  Anyone that visits Vienna will tell you the same thing, and it’s obvious from almost every turn that it was a center of culture, arts, and politics.  Our first stop was at the Hundertwasserhaus designed by Friedensreich Hundertwasser. 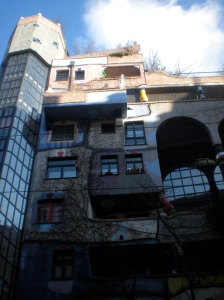 I’m not sure exactly how to describe it, from an architectural standpoint, which I guess is the point.  I’ve never been good with architectural critique-as-art, though I found the place to be very charming.

The sun was so pleasant that even though we weren’t in the center of town, we walked around, dim-eyelids and all, just enjoying the weather.  We got a real kick out of the very severe and specific German-spirited street signs.

And thoroughly enjoyed the sun on the path along the river. 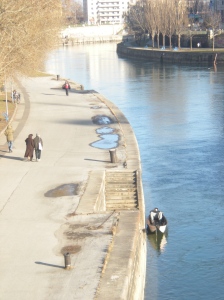 We finally made our way to the city center, or rather the main shopping district.  Though the other districts were quiet, the shopping district, like all European cities of this size and stature, was buzzing with people.

Granted it was one of the warmer days of the winter, and the sun was all blush, I was still a little surprised by how many people were walking around.

We stopped in a few stores to look for trinkets.  Like in Budapest, there is a real market for Sisi items.  Sissy or Elisabeth, Queen of Hungary and Empress of Austria, is an absolute icon.  Though she had a minimal impact on political life, there are more books, plays, films, and musicals about Sisi than probably any other ruler of the region.  Though she is said to have adored Hungary more, requiring her staff to speak only Hungarian and escaping to her Hungarian palaces whenever she had the chance, she is obviously well adored in Austria as well despite the fact that her strong personality didn’t mesh well with the strict Habsburgs.

After doing some gift shopping and buying some Austrian chocolates, we toured around the magnificent St. Stephen’s Cathedral.  The light was very thin there, and as the afternoon was setting, it was almost hard to see inside the church.  I didn’t want to take too many pictures because despite the hoards of people looking around, there were quite a few people sitting in the pews, kneeling in prayer to various saints.

Outside of the church, horse carriages lined up to take people around the city.  The sun was setting and we were getting hungry so we swung by one of the street vendors and had a bratwurst with mustard and, of course, a fine Austrian beer.

All in all, it was a beautiful trip.  My final impressions, though by no means objective or well informed since I was only there for a day, are that the city is really a beautiful city.  But more than that, it’s opulent, almost overly opulent.  It looks like it has been the seat of an empire, that there has been culture, arts, and of course money, for centuries.

I was constantly trying to compare it to Budapest, but in many ways it’s an unfair comparison.  One of the main reason is because the Russians didn’t roll in and destroy much of what makes Vienna opulent, as they did in Budapest.  But in many ways this is a digression too.  Compared to Vienna, Budapest, and a city like Prague, look more Eastern European, more severe, that’s for sure.  And I had this fact in my mind just before we pulled back into Budapest, and were driving along the river, with Parliament to my right.  While Vienna’s opulence and extravagance and beauty give it its character, I think that Budapest’s severity gives it its character.  Budapest’s orate Parliament and magnificent bridges are not found in Vienna, though Vienna has extravagantly beautiful museums and palaces.  With these differences, you can see how both cities could be part of one remarkable empire, both complement to each other.  And since the cities are only two hours apart, you can, like Sisi, let your preferences write what feels more like home to you.  It’s another charm of Europe, getting the chance to be a traveler in this way, and as usual, I count myself lucky.  And as for quality of life, well the companies who do the studies certainly believe them to be objective, but I don’t feel comfortable with the word quality.  We all love what we love.

One thought on “Bécs. Wein. Vienna.”