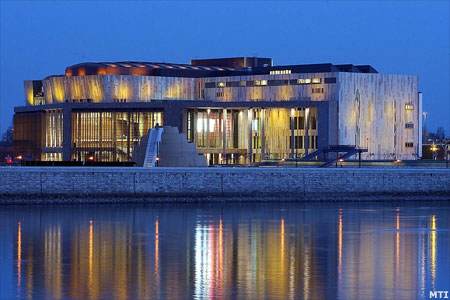 The truth is, you really cannot claim yourself to be an open-minded, progressive, viewer des arts until you’ve seen a few things.  Now, I don’t claim to be even close to an expert, but I’ve seen a few things in my day.  Extended performance pieces shut down by cops, food art raided by the health department, certain slam poetry performances that no one should ever be exposed to.  But still, I go back time and time again.  It’s entertaining.  Stimulating.  Interesting, if nothing else.  And though I know I’m going to get a lot of hate mail for this one, I’m ready to add a new category to my list of you-must-survive to claim to be an art lover:  contemporary ballet.

On Friday night, Györgyi and I went to the Művészetek Palotája where the ballet company of Győr was performing Gaudí in the Fesztivál Színház.  The Művészetek Palotája, or Palace of Arts, opened four years ago and won the Prix d’Excellence in 2006.  It’s a stunning structure, both outside and in. 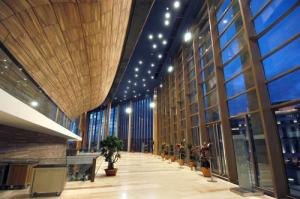 The ballet that we saw was inside the Palce of Arts in a small theater called the Fesztivál Színház.  Even though the main structure is so large, the smaller theater where we saw the ballet was quaint.  It also smelled like new wood, which is incredibly appealing to me.

So the ballet was two hours with an intermission in the middle.  We were drinking wine in the lobby before the show and they made at least four announcements that the show was about to begin.  I still haven’t adapted to the Hungarian sense of time, which is always just a little bit late.  While I gulped the last of my wine and warned G that the announcement had been made, she calmly reassured me, “Oh, they’ll make at least another two announcements.”  And she was right, the dance started about 10 minutes late because at the exact starting time only about twenty percent of the theater was full.

So Gaudí was interesting in that kind of in italics kind of way.  I mean coming out of school with a liberal arts masters degree I could go back and forth with quasi critical observations, but in my brain I was really thinking, “why are those people rolling around on the floor” and “someone should really use bleach on the costumes b/c they look like dirty underwear.”  But Györgyi is someone of an expert of contemporary dance, so I gave it the benefit of the doubt.  Here is the explanation from the ballet company:

He has formulated perfect harmony by combining various styles and materials. We, using the versatility of various cultures in ballet, attempt to present the Antoni Gaudí, the main character’s life, habits and the four of his most important works. The architect’s death does not represent mortality but the beginning of a rebirth, the eternity left for us in his legacy.

Even though I couldn’t make the connection from what I was seeing on the stage and what was written in the program guide, there were several really beautiful dances.  The set design was fantastic as well and the production also made use of screens and light in a really interesting way.  I didn’t really get religion, isolation, or rebirth from it, but at the end of the ballet, Gaudí slams five or so balloons onto the stage floor, which explode in colored paint, which was, for lack of more sophisticated observation, really really cool.

After the ballet we went to dinner at the very lovely Trattoria Toscana. I regret not taking pictures of the meal, because it was thoroughly delicious.  Before leaving, I read some of the local restaurant reviews by (mostly) American visitors.  Everyone agreed that the food was amazing but the service was terrible.  This is a common complaint with American visitors to Budapest.  But I thought that the service was fine.  Of course our waitress didn’t give us kisses on our cheeks or tell us how brilliant we were, but she got everything right and didn’t scowl.  Americans need to just relax about this issue about service in Europe.  It’s not going to change, so just embrace it and enjoy the food.

For starters I had a warm radicchio salad with bacon and pine nuts.  It was incredible.  For my main course I had a homemade pasta with a variety of fresh seafood including prawns, lobster, clams, muscles, and octopus. G also had a homemade pasta with prosciutto and porcini mushrooms.  Our deserts were equally amazing.  She had white chocolate moose and I had a gigantic crème brûlée with fresh strawberries.  We each had a cappuccino.  Finally, to put the service issue to rest once and for all, as we waited to finish paying the bill, the server (who had noticed that we were speaking English, by the way) asked us, in English, if we would like some complimentary grappa or limoncello.  This is a courtesy that they extend to everyone as they wait to finish paying.  We both had limoncello and it was the perfectly sweet ending to a lovely night.

4 thoughts on “From Ballet to Brûlée”

Leave a Reply to mary x