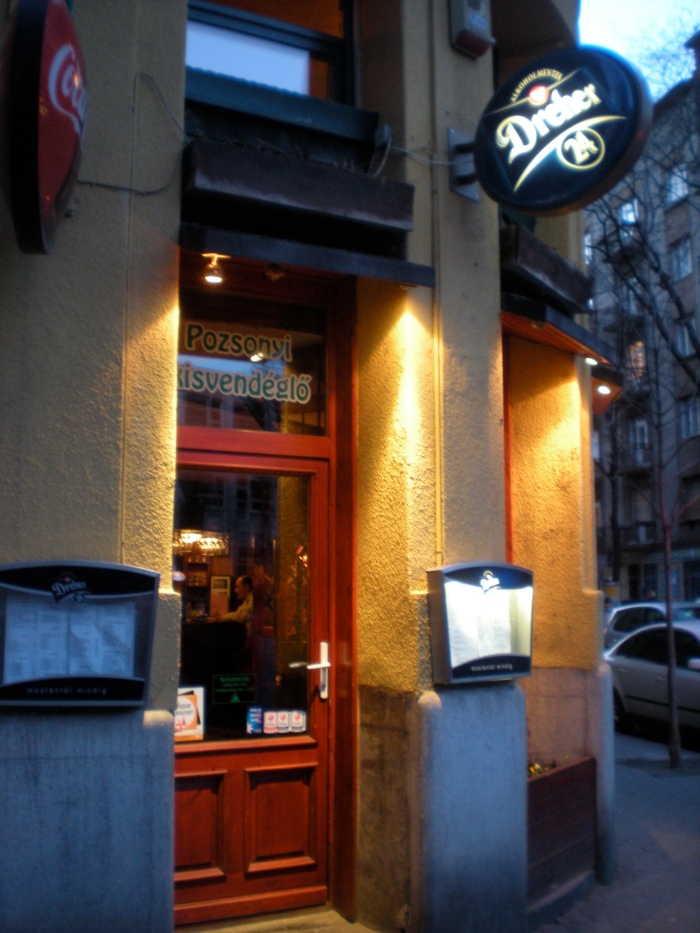 Pozsonyi Kisvendéglő is not in a hip part of town.

Even though it’s a leisurely ten-minute walk from the Four Seasons, it’s in the direction that most tourists would not go.  They go to the river, to the Lánchíd Bridge, to the V District with trendy boutiques, overpriced drinks, and chachki-filled aisles of Hungarian classics like hanging ropes of paprika, collectible Unicum posters, tee shirts with big pictures of sausages and cold war trinkets from those hilariously memorable years of communism.  And now with Easter approaching and the armada of tourist buses roaring back into the city, there will be more and more people walking out the front door of the Four Seasons and heading in exactly the wrong direction.

Now, the real bustle is going on to the right of the Four Seasons.  Walk there, toward the distant cranes and old cotton factories and you’ll start to see the people who actually live in Budapest.  They are buying fruits and vegetables in the little shops, getting advice from the butchers, buying flowers from a street vendor, chatting with each other window to window, watering their stoops for no apparent reason.

There is so much life that happens outside of the tourist areas that I really feel compelled to urge visitors to get off of the city-bus-tour path.

And if you’re around on a Friday night, do what we, the locals do.  Last night we decided to go to Pozsonyi Étterem.  You will not hear about it in a guidebook, but it’s really a favorite of the locals.  It’s dark, smoky, and you will absolutely leave smelling like you were deep fried for about an hour.  But it’s worth it.  They serve really affordable, traditional Hungarian food and if you are shy, they speak English.

We went at five, which even for the always-full Pozsonyi was a dead time. 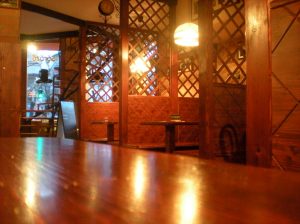 Unless you can make reservations, I would suggest going early.  Remember, Europeans like to eat late, (so, Dad—you never have to worry about waiting for a table.)

Since I ordered soup, the waitress brought over bread and a little bowl of Erős Pista, which is really spicy pepper spread.  People put it into their soup here, especially goulash.  It’s extremely spicy, made from dried paprikas, but if you like a little heat, it’s very delicious.

We started off with some fried mushrooms, just for a little snack while we had a drink.  We both wanted to get the ones that had the cheese inside, but there was a little Hunglish miscommunication and we ended up with the plain ones.  But they were delicious.  Plus, the waitress split the order for us and did this totally adorable plate decoration.  I mean seriously, a raw carrot, cucumber, and piece of lettuce?  How old school is that?

For my main course, I had Jókai bableves.  This is a bean (bab) soup (leves) in the Jókai style.  In addition to the beans and veggies it had rib meat—think Easter ham in flavor but thicker, fattier, and much much more tender.  Hungarians know their soups and this one proved it.  It was so delicious.  Smoky, beanie, dumplingie and every so often there would be a little bite of sour cream on the spoon with smoothed the tastes out even more.

ham fat is your friend 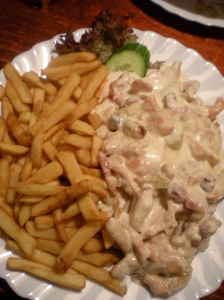 There must have been two whole chicken breasts in there.  And the chicken was stewed with bacon and cream and we think butter and cheese sauce.  Seriously.  It was really amazing, I had to admit.  It was one of those meals that you take home and put in your fridge and then sometime later, when you’re a little drunk you remember it’s in your fridge and go after it like a starving bear at a fish fry.  (Not that we did that later that night after poker—I’m just saying, I’ve heard it happens).

So when you roll up in with your tour bus this spring or summer, just remember to go where the locals go.  Do not listen to the waiters in the fifth district who try to convince you to eat at their restaurant.  Walk toward the real city, the older-looking city.  Get on a bus and get off where you see people without fanny packs and guidebooks eating and drinking. You probably won’t regret it.

Seriously, if I catch you eating Sushi next to the Four Seasons, I’ll slap you.