Perhaps it was good spring luck or the fact that the economies of central Europe are in pieces, but early last week I found some amazing deals for 4-star hotels in Prague and decided it would be folly not to go for the weekend. 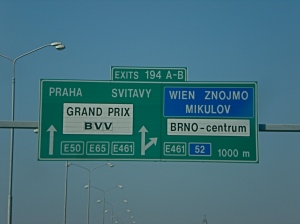 Prague is situated on the River Vltava in central Bohemia and is the capital city of the Czech Republic.  It is truly an ancient city, dating back to Paleolithic era and Prague Castle is the largest ancient castle in the world.

We set out from Budapest early in the morning.  The trip from Budapest to Prague is only about 4 ½ hours by car, if you stay at the speed limit of 130 kph (80 mph), though I learned quickly that most people go at least 150 (95 mph) except for the trucks who you are always having to slam your breaks behind so that you don’t smash right into their taillights.  And no one gets pulled over by cops, really.  They just catch you on radars and send the fines to your address.  I learned this half way through the trip when Györgyi woke up from sleeping in the passenger seat and wondered how fast I had been driving.  Keep your fingers crossed, Internet.  I may have to get a night job.

We stayed at Andel’s Hotel Prague, which is about 4 metro stops outside of Old Town.  When we arrived we were told we were upgraded to the Executive Suites, and I have no idea why, but Executive Suites + Free Breakfast + Nice Modern Design (for only 70 Euros per night) =  totally awesome deal.

On Saturday afternoon we walked from the hotel to Charles Bridge (about 30 minutes on slow foot).  The weather was incredible, over 70F and loads of decadent sunshine.  Just like in Budapest now, tourists are everywhere again. 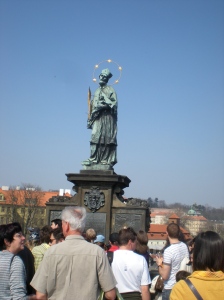 We decided to sit down for a little bit at a riverside café overlooking the Charles Bridge.  We each had a pilsner and just took in as much sun as possible. 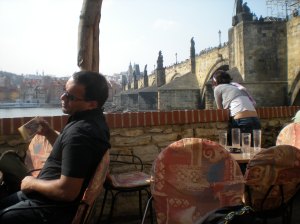 After sitting for a bit, we decided to go to the Jewish Quarter and try to get into the Old Jewish Cemetery. 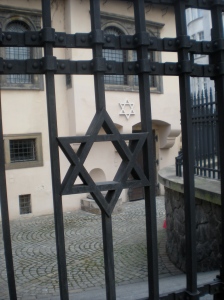 The cemetery was built in the 15th century because Jews were not allowed to bury their dead outside of their own district.  Because it was such a small space, the bodies were buried on top of each other, some estimating the layers at as much as twelve.  Franz Kafka used to go there all of the time to think and write and people have said it’s really something to see if you visit Prague.  Unfortunately, we by the time we got there it was already closed. 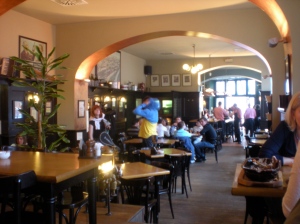 We had dinner at Kolkovana.  It was really very good and on the Michelin Guide to International Restaurants.  But we decided to eat there because it had a very pub-like flare with a Czech menu.

I had a mixed light and dark Pilsner Urquell, the first Pilsner in the world.  In addition, our waiter convinced us to have a shot of Becherovka, which is an herbal bitters liquor and digestive and I think much easier to drink than the Hungarian version, Unicum.

For dinner, Györgyi had the Moravian “Sparrow” which was roasted pork with garlic and onions, with bacon dumplings and white and red cabbage.  I had their homemade sausages from the restaurant’s smokehouse.  There were three:  venison, beer, and white with pepper and were served with apple horseradish and spicy mustard.

After dinner as the sun was setting, we walked toward the sounds of a large crowd and music.

We had found the Easter Market.  Around every holiday and season, these little markets spring up all over central Europe.  Like in Budapest, the Easter Market rivals that of the Christmas Market in size and amount of attractions.  The one big difference, of course, is the lovely weather. Craftsman, stalls, food, beer, music.  People talking, shopping, eating.  If you plan on going to Europe around a holiday, it’s one of the things you have to witness. 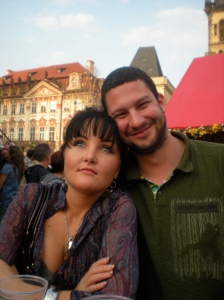 As we were walking around, we bumped into two of Györgyi’s friends, Géza (CEO and DJ of Radio 88 in Szeged  and his fiancé, Anita.  Actually, Géza had proposed to Anita just that weekend, so congratulations to them!

We had a few beers together. Géza regaled us with surprisingly interesting Prague historical information and Anita discovered for us an unexpectedly clean and cheap public bathroom.  We had a few more drinks together at a local pub before parting ways and going back to our hotel for the night.

Sunday morning we woke up early and enjoyed our complimentary breakfast at Andel’s hotel.

Then we took the underground back to the Easter Market.  It was quieter in the early morning because President Obama was in town giving a speech at the castle to around 30,000 people. 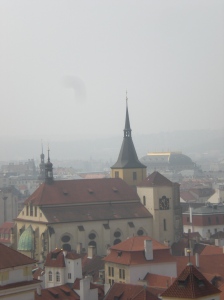 We went up to the top of the Astronomical Clock tower and took pictures of people gathering to watch the hourly display.  It was the perfect place to get panoramic views of Old Town and to see the Easter Market starting to hum alive toward afternoon.

Before we left, we walked the side streets a bit, did some shopping, visited the national museum, and of course, had lunch on the street.

I think there were a lot of similarities between Prague and Budapest, especially in the historical area, especially in the chachkie alleys.  And a lot of the architecture was very reminiscent of Budapest, or they were reminiscent of each other, I should say.  Prague struck me as much more ecclesiastical than Budapest, and has perhaps a more prominent (or well known) Jewish district.  But the structures in the side streets, along the river, were very similar.  There were a lot more American tourists in Prague than I ever noticed in Budapest.  Maybe because it seems more westernized, more familiar to Americans for some reason, though depending on who you ask and where, it can be debated.  Tourist season is upon all of Europe now, and I have to say it was nice being a tourist in Prague.  It was a beautiful city and I’m looking forward to visiting again.

7 thoughts on “The Golden City”