Chicken Paprikas is for many people a meal of childhood (regardless of the country you were raised in).  It certainly is true for my childhood.  Despite my father’s general dislike for sour cream, a clear indication he has NO Eastern European genes, my mother and grandmother made chicken paprikas frequently for our family.

If you didn’t know already, paprikas is the Hungarian word for pepper.  Hungarian paprika is probably the best in the world, and the paprika from the Hungarian Great Plain is of the highest quality.  It ranges from sweet and mild to extremely hot.  Though it is one of the foremost symbols of Hungarian cuisine (you can see strings of drying paprika on almost every street corner and market), it was actually brought to Hungary by the Turks.  Regardless, it is central to Hungarian cooking.  It was paprika, after all, which led the Hungarian scientist Albert Szent-Györgyi to discover and extract vitamin C, for which he was awarded the Nobel Prize.  And this is all to say that when you make Chicken Paprikas, use Hungarian paprika.

IGNORE POTATOES. They felt left out so I let them be in the picture, but they are NOT part of the chicken paprikas recipe

1.  Clean chicken by trimming some fat but leaving the skin.  If you want to make a healthier version of the recipe, you can use boneless, skinless chicken breasts, but the seven founding Magyar kings will be rolling over in their graves.  They may haunt you, actually.  Just make it with dark meat and bones and skin.  You can work out extra tomorrow morning

3.  Add a tablespoon of vegetable to a large pot and heat on medium-high.  Add the chopped vegetables to the pot and sauté until translucent (3-5 minutes)

4.  REMOVE POT FROM HEAT (paprika burns.  The taste of burned paprika is not a pleasant one.)

5.  Add 2 Tbs of Hungarian paprika, ½ Tbs cumin, salt and pepper to the pot and stir until all of the vegetables are coated 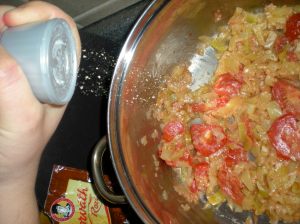 6.  While the pot is still removed from the heat, add the chicken to the pot and stir until the chicken is coated with the vegetables and paprika

8.  RETURN POT TO HEAT and cover with lid

9.  Cook for 1 hour on medium to medium-low heat

10.  In a separate container, mix together 8oz of sour cream and two tablespoons of flour. 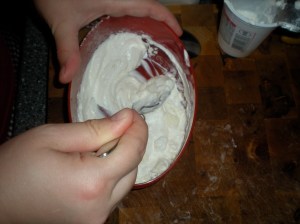 12.  Add the sour cream/flour mixture to the pot and stir. 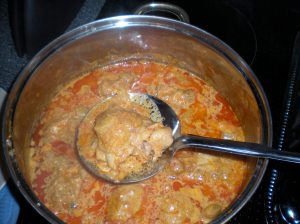 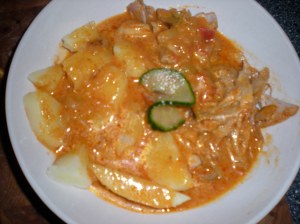 14.  Serve with dumplings, noodles, potatoes, bread or nothing at all.  ENJOY!

Note:  As you can see from my plate, that Györgyi took the chicken off the bone for me and made mine kind of saucy, but only because I like it that way and that’s how I ate it as a kid.  She would eat it with the chicken on the bone, very little sauce, and served with a side of dumplings.  It’s your preference, people!  That’s the beauty here!