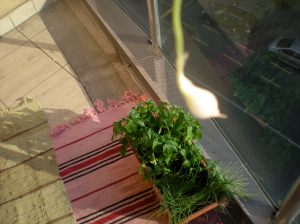 I took about fifteen pictures and I still couldn’t get my little dinky camera to focuson the onion and not the pot, but I’m sure there’s a metaphor in there somewhere.  Still, as you can (almost) see, we have onions!!! Well, maybe they’re still too small to call them onions, completely, but the fact that this little white onion that is now the size of half a pea actual grew, under my care and supervision, from a seed, is really kind of cool, I have to admit.  I haven’t seen any peppers yet, but there is so much going on in that little pot, I’m sure something will bloom soon enough. 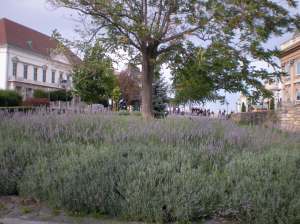 Even though the city is fully buzzing with tourist season and summer  in the air with the smells of warming bricks in the castle and blooming lavender, it’s still seemingly taking forever for July to work its way past me.  Probably because I’m so furiously counting the days until I get to go home for a little bit.  I keep asking myself, when did I become such an Ohio girl?  I can’t remember ever loving Ohio when I grew up there.  And then suddenly when I became an adult I felt such a draw back to it.  Some people call it the curse of the Cuyahoga, that if you ever live in Ohio, you’re doooomed to live there again.  But I don’t think of it as much of as curse.  And a lot of people I know would agree.  Sentimental people like me, probably, with a little nack for the melancholy, or perhaps the poetic heart that feels calmed by family dinners outside in the clean air, bike rides in the valley and beers at the Lizard to follow them.  Farmer’s markets and farmers.  And I could go on, which is why I’m so looking forward to my trip. 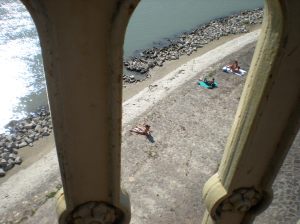 Until then, I’m going to try to occupy my brain with other tasks, first and foremost with surviving the incredibly hot weather (about 100 F the last few days).  I have to plot a long run for tomorrow, buy some clothes for the trip, and maybe, by next week, have everything in order so that I can start the slow and hopefully stressfree process of packing.  Not much for weekend plans.  But it’ll do for an early summer day.