The story goes a little something like this:  17th century Hungary and the Turks are burning their way through the land and people and goods like it’s no one’s business.  Inconveniently they arrived in late summer to what is today northeastern Hungary just at the dawn of grape-harvesting season.  Obviously the people had a little bit more to worry about than wine and so they left the grapes alone.  And there they sat on their sad little vines until the very beginning of November.  When the people finally had time to go and collect them, they all were devastated to find that the grapes had, apparently, “rotted.”  Well one brave soul called Laczkó Máté Szepsi decided to give these grapes a go anyway and made, what some argue, was the first aszú (grapes with noble rot).  These wine-myth stories get a little muddled in history, especially because the timelines are a slighty off.  Hungary was just finishing up with the Ottoman invasion, for example, and the anti-Hapsburg movement was underway.  But mostly it’s not important who was the invader or the pillager or the occupier.  The important thing is that a little miracle was rotting on the vine.

There are other wine-myths in Hungary surrounding the Turks, and as in all of the surrounding regions that have claimed to have the first aszú, most of these stories are built up by people who are damn proud of their wine.  One thing is true, however, that the Tokaji-Hegyalja wines probably have the finest sweet wines in the world, even getting the royal wink of France’s King Louis XVI who, after sampling the sweet aszú wines, deemed that the Tokaji wines were “Vinum Regum, Rex Vinorum.” Wine of Kings, King of Wines.

We left a rainy and gray Budapest late Saturday morning and by the time we neared Tokaj-Hegyalia it was immediately clear why the region is so famous for its landscape and climate.  The weather was perfect and the early afternoon absolutely dazzled through the windows.

We arrived in Tokaj around 12:30 and decided just to look around the outskirts of the town.  It was so calm and quiet I could have laid down under the bell tower and pine and fallen asleep.

After a short walk around to find the restaurant where we had dinner reservations, we drove back out of Tokaj 7 or 8 minutes to another small, charming town, Tarcal, which is where we were staying at the Gróf Degenfeld Castle Hotel and Winery.

Count Imre Degenfeld was one of the founders of The Wine Association of Tokaj-Hegyalja in 1857.  The hotel was once a country house on the Degenfeld royal estate, and as we learned was also a school for winemakers before the family converted it into a historic hotel.  I have to say that it was one of the nicest hotels I’ve stayed in since coming to Europe.  It was a 4-star hotel, but these star ratings are a little lose, especially in this part of Europe.  But it was very luxurious.  The 19th century decoration was elegant and the rooms were shockingly spacious.  The staff was attentive and friendly.  There is 1 suite and 20 rooms and from what we experienced, I would absolutely recommend this hotel to anyone who is going to be in the region.  Having a car helps, of course, because the hotel is about a 10-minute drive outside of Tokaj.  But, if you don’t have a car, (or if you’re planning on hitting the sauce along the charming tasting rows) the hotel can arrange a car into town.

We arranged for a private cellar tour and wine tasting for Saturday afternoon, and it was truly a wonderful experience.  First of all, we were the only ones in the whole winery and on the tour.  I was a little big surprised because I thought there would be others, but it was just the three of us. 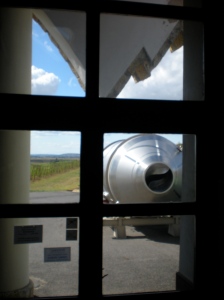 Our tour guide, Reni, took us through the winery and then into the ancient cellar.  The tour was really informative and it lasted almost an hour.  We asked questions, saw the lovely rows of casks made strictly from oak from the Zempléni Mountains, and learned a lot about the vineyard and the region’s wine history. 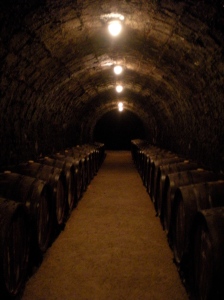 After the tour of the facility and cellar, we went back to the hotel to the tasting room for our deluxe wine tasting.

I won’t go into details about all of the wines that we tasted because if you are interested, click here for the tasting list, notes and package prices. 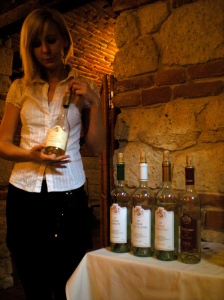 By far, we enjoyed the Tokaji Muscat Lunel 2007.  It is a semi-dry wine, which has a lovely and refreshing bouquet.  It’s definitely a summer wine, but one to drink all year for that summer feeling. 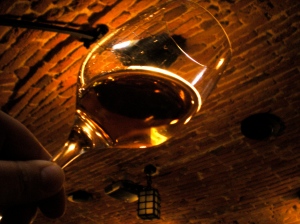 Nota Bene:  Reni did NOT short glass us (this is something my parents will be very glad to hear).  And though we were taking lots of notes and asking good questions, by the time we hit our 8th pour, we were pretty sauced.  At one point between the 6th and 7th wine, Györgyi asked Reni if she takes candles into the cellar to protect from any surges of Carbon Monoxide, after which I threw my horrifying-topic-switch hat in the ring by discussing early mining practices and birds dropping dead in cages in mine shafts.  Regardless, it was good that we had a little water and bread and made it back to our room without too much trouble to rest before dinner.

Before going to dinner, we walked around the vineyard a bit and took some pictures.  I don’t know if it was the remnants of the wine or just the simplicity of the evening sunset, but I felt very sentimental in those vineyards.  The evening was just lovely and I hope anyone who visits Hungary can get a chance to see the wine region.

We had a light dinner of fish at Bonchidai Csárda where we sat on their terrace overlooking the Tisza river.

We went back at sunset and both were in complete silence admiring the beauty of the countryside.  There’s something really wonderful in that feeling that the land is getting sleepy with you. 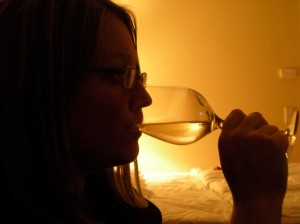 Back in our hotel room, we enjoyed the bright moon and the open windows streaming in the vineyard air with a crisp bottle of the Muscat Lunel.

It’s easy to see why the likes of Voltaire, Heine, Goethe, Liszt, Beethoven etc., exalted the Tokaji wines.  They are wines that truly sing of their lovely region.  The wine of kings and queens.  And the rest of us looking for a little slice of that loveliness.