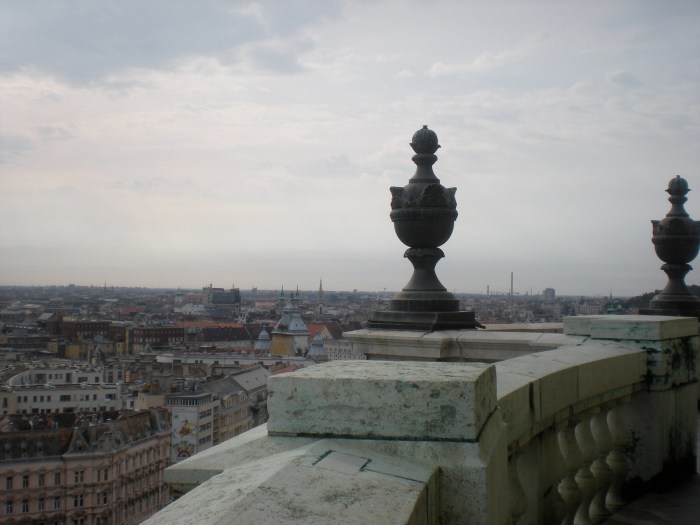 On Saturday early morning we found ourselves full of energy for exploring the city and doing so many of the touristy things that people who live in a tourist town never do. 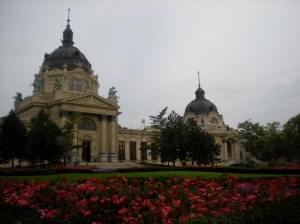 Our initial plan was to go to the big flea market, the Ecseri flea market, which is known for being the place to find just about anything.  And I love browsing for kitcsh in the fall, so being that it was kind of an overcast day we headed over there.  Unfortunately when we got there we saw signs that it was closed for the day.  This was a bit suspicious, since it’s never closed, but as it is the largest flea market in the country, and is known for attracting some unsavories, there was probably something illegal that shut it down for the day.  Oh well.  So we formulated plan B on the fly, drove around Szechenyi Baths and then somehow meandered back downtown to have a bagel and coffee outside of St. Stephen’s Basilica.  That was when it occurred to us that we had never been inside. 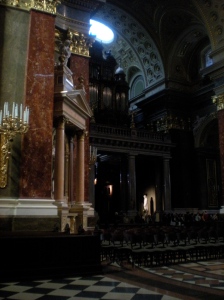 St. Stephen’s Basilica (Szent István-bazilika) was finished in 1905.  It is neoclassical and it took 54 years to complete because in 1868 the first dome collapsed and it had to be scrapped and built again.  It was built for St. Stephen, the first King of Hungary, and the man who brought Christianity to Hungary. It is also home to his szent jobb, “holy right hand”, which is his actual mummified hand and a holy relic.  The Basilica is also the largest church in Hungary, with a capacity of 8,500 people.

The whole church was greatly damaged during World War II and it was used during that time as a military barracks but also to house important documents and art work.  Renovations and reconstruction didn’t begin until the 1980s and they took about two decades to complete. 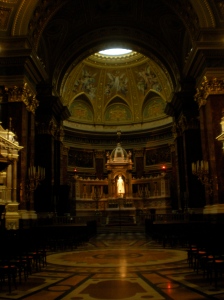 Since I grew up Catholic, I have a little bit of Catholic church immunity.  And what I mean is that usually I can appreciate the architecture of the bedazzled mummified body parts of saints, etc., but I don’t really have much of a reaction to the churches.  But for some reason I was really dazzled by the church.  When I was inside, looking at the detail and embellishments, the gold chandeliers, the light spilling in through the windows, I got a little teary-eyed.  And it wasn’t some kind of spiritual experience, but it was certainly a reaction to the beauty of the church. 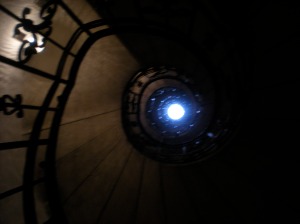 At ten ‘o clock you can climb the 350 or so stairs to the top of the Basilica for a magnificent view of the city.  The cost is 500 HUF (less than 2 Euros) and it’s completely worth the price.  Since we were there right at 10, we were the first ones up. 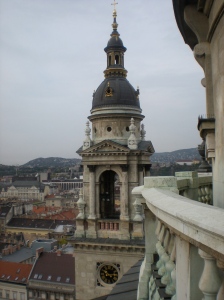 Even though the day was a little gray and overcast, it was such an amazing way to see the city.  From the quiet Szent István tér (St. Stephen’s square) where we have had coffee or drinks countless times, to the heart of Pest, or to the hills of Buda, the view was just incredible.

This is a great way to see some of the city (though unless you are in the best shape of your life, 18 years old, or don’t mind your leg muscles stinging for three of four days after your upward haul, I would recommend taking the elevator).  It was hard for me to list specific differences between Budapest and Prague when I visited in the spring.  But from the top view, it’s easier to see the differences.  I don’t think anywhere in the world can compete with Prague’s rooftops.  Or maybe I just have an odd fascination with rooftops.

I have posts all week for this day, actually.  After leaving the Basilica, we went to the park, to the zoo, to lunch to an art exhibit, and to the Palinka festival.  Sigh. October’s the best.