I should start off by saying that I am not a good plane traveler.  Haven’t been for years now.  But after a few handfuls of xanex, I’m usually ready to hit the skies.  Unfortunately my trip back to Europe wasn’t the smoothest.  First there were the delays in Cleveland when the pilot actually turned the plane off on the runway for an hour.  Then delays in Newark.  I thought the short 6.5 hours to Madrid would be better, since I ensured an aisle seat.  Only the man sitting in the seat next to me (in the middle seat…on a 757) (who was traveling alone with his 10-hour-old baby)  wanted to switch with me.  And of course I had to say yes.  Not out of moral obligation or general decency but the fear that god would either crash the plane on account of my selfishness or shrivel my ovaries right on the spot.

As you can imagine, I was more than happy to arrive in Madrid, and check into the lovely Hotel Wellington.  You’ll notice from the above picture that there is no large suitcase blocking the shot of the room.  That is because the ground crew in Newark was unable to transfer the bags from the Cleveland flight to the Madrid plane in the hour and a half that we had before leaving.  My suitcase did arrive the next day, however, and was waiting for me in my hotel room. 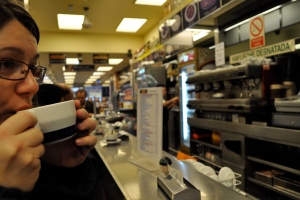 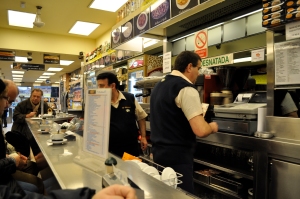 The morning of New Year’s eve, we went into the part of town near to the Prado and Reina Sofía museums.  Before anything else, we drank a civilized café con leche and planned the day.

We would have liked to go to the museums, but the Reina Sofía was closed until the 2nd and the line for the Prado was over an hour long.  And as we were deciding whether to wait, it started to rain. 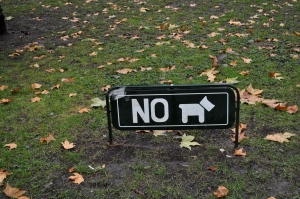 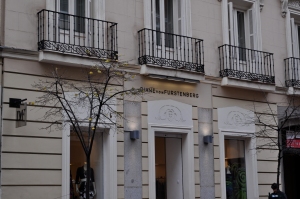 So we walked back toward our hotel, which was only about a mile away from the museums.  We explored the neighborhood around the hotel a little bit.  It was stocked with swanky boutiques and designer shops.  But considering the fact that our hair was matting to our faces on account of the rain and I was wearing clothes I had washed in the sink the night before, we didn’t attempt to go into any of them. 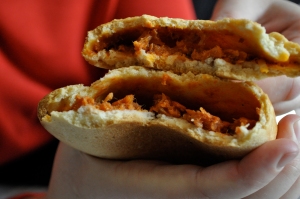 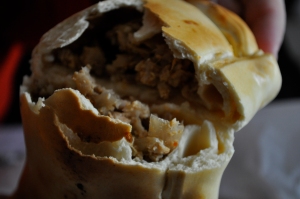 Then it really started to rain.  So we popped into a little bakery and grabbed some empanadas to take with us back to the hotel room.  Clockwise from the top left:  Empanada plate, red pepper, queso & Iberian ham, and some kind of meat/onion/garlic one.  They were all delicious.  Click on the pictures to see them in all of their new Nikon D5000 luster.

After a short nap, we looked out the hotel window and didn’t see any rain.  And since my bags had arrived that afternoon, I put on fresh clothes and we left in search of dinner. 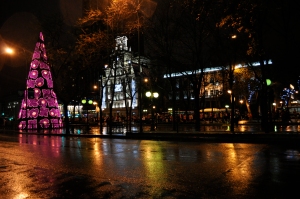 We made it three metro stops away from the hotel before the downpour started again.  On the way we ran into a pack of runners.  I’m not sure what the race distance was (because these New Year’s Eve runs were happening all over Europe) but I was glad not to be running that night.  Click on the picture on the right to see the runners more clearly.

We abandoned our search for a restaurant and headed back to the hotel to do what any reasonably minded people would do on a rainy, New Year’s Eve in Madrid: 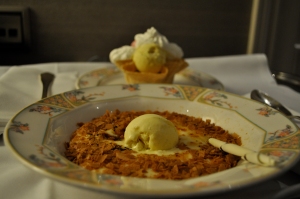 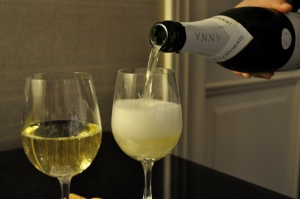 Eat dessert and drink a sparkling Spanish wine.  And as it turns out, it was the perfect way to spend New Year’s Eve in Madrid.