I think that for most people the last day of a trip (no matter how long you’ve been in a place) is always the day to revisit favorites. While there is some rush to see what you’ve missed, there is almost always time to go back to what you loved the most.  Restaurants, bars, monuments, shops, etc. So while we already spent a late morning in Retiro Park, we went back on our last day, and while we can make coffee and steamed milk just about anywhere, we had to have one last Spanish café con leche.

We strolled for a little bit, looking at the street vendors’ wares before getting onto the city tour bus. You might think that these tourist buses only run during the nice weather.  And you would be wrong. Not only do they run all year long and in every kind of weather–they are ALWAYS packed. You may recall our experience last New Year’s Eve in Dublin:

My parents were lucky enough to sneak one of the “heated” outdoor seats, whereas Brian suffered mild hypothermia that was cured only by two or three Jamesons. 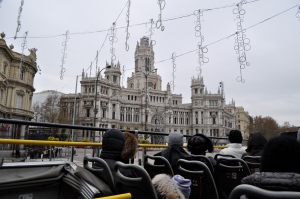 The rain was starting to drizzle down on top of the cold winds, and as you can see, I didn’t make any efforts to even try to get people’s heads out of the pictures. The French lady on the right (who was TOTALLY ROCKING that Paddington Bear hat) was quite inspirational in the way she dashed from seat to seat capturing shots. You should check out her blog. I’m sure there are some nice pictures of downtown Madrid.

I tried to get a shot of the castle, but then it started to rain so we went down to the inside of the bus where you can’t see anything except the city’s alleyways and crowds of people. But it was nice. We road around down there to get warm for about a half hour, before getting off for some coffee and churros.

We got onto the Route 2 bus, which had a covered top, and took the trip to and around new Madrid. When people ask me what I thought of Madrid, I use this as my example. The entire 30 minutes of that Route 2 tour was like this:

On your right you’ll see a bank.

On top of that hill there you’ll see what was once the fanciest bank in all the land.

This street is where the bankers used to live before they moved to banker street, which we will come to soon.

In front of us is statue park commissioned by and featuring bankers.

Madrid was nice.  But it was also a big, cosmopolitan metropolis. It felt like Europe, but that should be a given. I’m really happy and grateful to have been able to see Madrid, see the museums and sample some of the local cuisine.  I had a wonderful New Year’s, a holiday I usually hate and have been lucky enough to have two good ones in a row. And I am very much looking forward to our beach week in Marbella at the beginning of March. And maybe someday I’ll go back to Madrid–in a warmer month when the parks are blooming.

I guess that the more I travel, the more I realize how big the world is, and how much I still have to see.