As I mentioned last week, we spent a few days in Donovaly with our friends Szilvi and Meme.  Donovaly (Dóval in Hungarian) is a small, Slovakian village in the Banská Bystrica Region.  It’s located between the Veľká Fatra and Starohorské vrchy Mountains in the Low Tatras National Park, which lends itself naturally to a very popular ski resort.

The drive to Donovaly from Budapest takes about three hours.  There is some warranted criticisms about Donovaly that it is crowded and full of a too-posh crowd (or–not-friendly-to-Hungarians crowd–though we didn’t experience that attitude at all). And of course, it’s not Austria.  But for a three hour trip through mostly small villages, it’s a nice weekend ski resort.  You could, I would imagine, even just go for the day if you left early enough.  As you can see from the pictures, the weather was ghostly.  That gray haze from the ice and fog didn’t clear the entire trip.

We stayed at DamiSport right at the top of the blue slopes.  It is a 3-star hotel/restaurant/bar/ski rental/ski school.  And actually it was a very nice three-star establishment.  The rooms were lodge-inspired, though with modern shower and electronics amenities.  And free wireless Internet, which even certain five-star hotels don’t offer these days.  For less than 200 Euros we had lodging, breakfast, and dinner for 3 nights. They are also open in the summer and host the wild downhill biker crowd.

Since we are still learning, Donovaly was a good choice for us.  The blue slopes were high enough, though allowed us to spill out toward the untouched sides of the slopes and come down slowly as we practiced. 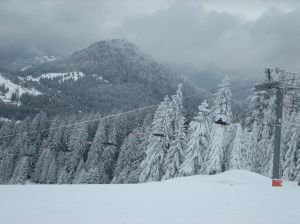 By the beginning of the week, the crowds weren’t as bad, which of course made it much easier for us.  And actually we did really well.  I can now confidently say that Györgyi  is just as hooked on snowboarding as I am.

Probably one of the best parts of the days spent on the mountain were the time we sat down in the powder to the very side of the slope and just looked into the haze. 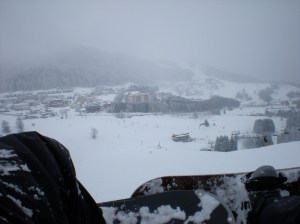 As cold as it is out there, you can really work up a heat in all of the gear (since we’re still beginners, we were wearing FULL body armor, like snowboarding football players).  So it was nice to just sit down in the snow and listen to the sounds and look at the snow-logged pines.

And of course, we had some amazing meals and drinks in the most adorable little folk-lodge settings. 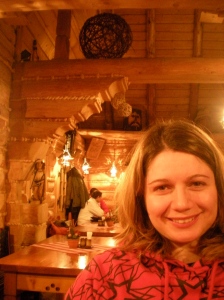 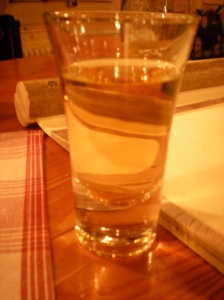 I was a big fan of the Urpiner beer, which was the local beer from that region in Slovakia.  Györgyi enjoyed 1 or 2 Becherovkas, which is a bitter made in Czech Republic. 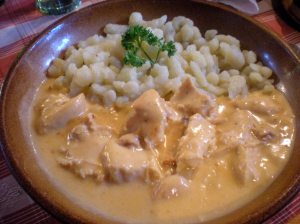 And ONLY because we were getting so much exercise on the mountain, we decided to have a few rather rich meals.  The top selections were from a delicious lunch we had on the second (and third) day.  On the left–Chicken Paprikas with dumplings and cream.  And on the right, (I don’t know what it is officially called, so I will give it a name) dumplings’n cheese with fried bacon.  Seriously.

We had a wonderful time in Slovakia.  The pines were beautiful and the weekday slopes weren’t too crowded.  And for the price, it was really worth the trip there.  (But I hope it won’t be our last snowboarding trip this season.)