We drove into Semmering at night after a late departure from Budapest. Stuhleck at Spital am Semmering is the highest summit of the Eastern Alps and is the largest ski resort in East Austria. It’s also a very easy three-hour drive from Budapest. That is if your Garmin GPS is working correctly and doesn’t have any trouble guiding you around a closed mountain tunnel pass.  And doesn’t take you up the entire opposite face of the mountain where there are no lights and suspiciously no cars.  And then doesn’t suggest that you try to drive up a utility road with about 2 feet of snow on it.  And then doesn’t suggest you drive all the way down the mountain weaving through hair-pin steep turns, turn around, and then drive up again as the Alps blizzard is doing everything it can to test out those new Audi back-wheel drive quattro power system… 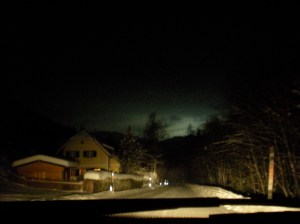 But we eventually made it.  And we didn’t end up in a ditch at the summit of the Eastern Alps. And the moon was so beautiful glowing behind the mountains we were almost able block out the quite perilous situation we were in.  After all, we were going snowboarding in the morning. So it was worth it.

The hotel was snow-covered and pretty much exactly how you would imagine a guest house on the slopes. Outside there was a small pub where on Saturday a brass band was playing as people sipped Austrian wheat beer at the tables and on the sun chairs, and rotisserie chickens sizzled on the open-air spit. 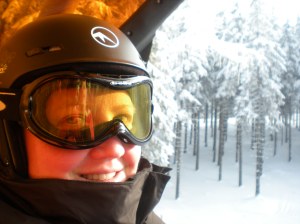 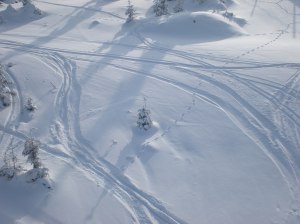 The weather on Friday was amazing. Sun so bright you almost couldn’t feel the freezing temperatures because your skin was too busy filling itself with rays. From the lifts, the trees looked exactly how I would imagine them in ancient, northern forests. These evergreens look hardy, for sure, survivors in temperatures and altitudes where other plant life just can’t make it. 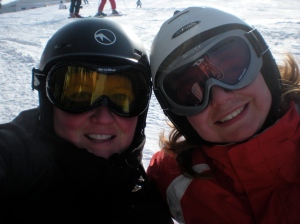 At full speed it would take maybe 30 minutes to get down the mountain from the very top. Though I can’t be sure.  We weren’t going full speed, and we often pulled over to the side to just sit down and admire the view. The light was so bright that my point-and-shoot camera couldn’t discern the sparse cloud-cover for distant snow-covered ranges. But trust me, it’s magnificent.

At almost the top there was a great restaurant where people would stop to eat lunch and have a drink. On Friday we had the daily offer, which I think every single person in that huge venue was also eating: 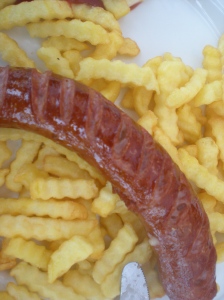 To our credit we didn’t drink any beer until we made it all the way down. If you are at nice grocer you may be able to get Edelweiss, which is an excellent wheat beer. I’m not a big fan of fancy beers myself, but it was really good. And for Györgyi who is typically Hungarian, therefore a wine-drinker, she said she really enjoyed the Edelweiss. (Though last year when she had it she said it tasted like banana bread, so maybe you shouldn’t take her advice.) 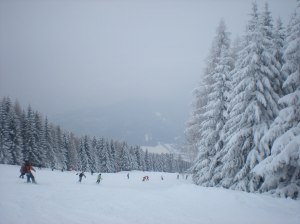 The more I go snowboarding, the more I can understand those people who abandon their office jobs, move to a little ski town, and become a ski or snowboarding bum. Amid the pines and peaks it almost seems reasonable, especially mid-February when the sun feels like a warm, velvet blanket. But for now I’m going to have to be a weekend snowboarder, and try to enjoy any time and peace I do have on the mountain.