My mom and I were sitting in the flat. We had our usual night watching the quiz shows and having dinner in front of the TV. No matter how loud the TV was, we still couldn’t overcome the sounds of the bombs. It was scary. But we didn’t talk about it. It was kind of a don’t-talk-about-it or don’t-notice-it, as if talking about it would make it serious

I sometimes looked out of the window, because it seemed closer. We heard the airplanes, too. And since we never heard them before –my hometown is not a used air corridor of Hungary- it gave us more fears, of course.

I never went to Yugoslavia those times. I didn’t know how close it was. When I heard the bombs or whatever those sounds were, I realized it was much closer than I could ever imagine.

We saw it in the news. The war started at the Balkans. We saw some pictures, videos. I can hardly remember them, but the picture in my head. Bombs exploding. Sad and dirty faced crying adults and children.

–Györgyi, reflecting on the sounds of war in the former Yugoslavia 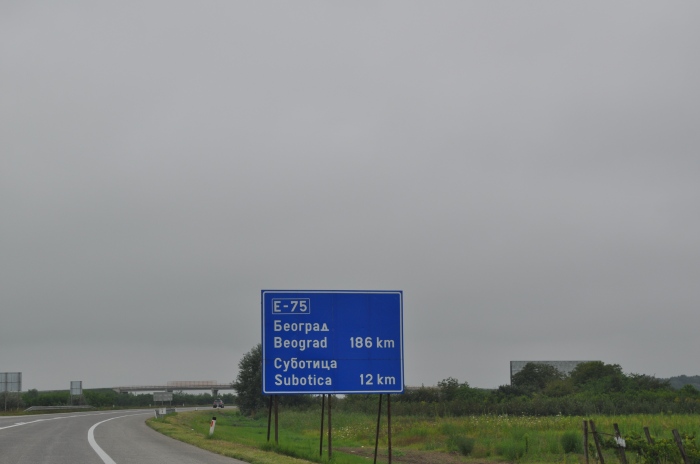 Saturday we went to Serbia.  Our purpose was just to spend the day there and go to the market in Subotica. Though Belgrade is only about an hour and a half away from Szeged, when we crossed the border into Serbia, we knew immediately it had been a mistake to go on Saturday. For several weeks, the border agents have been fastidiously serching cars for illegal Turkish workers and contraband. When we saw the line of cars trying to get back into the EU, we decided to try to find another border to cross back into Hungary. 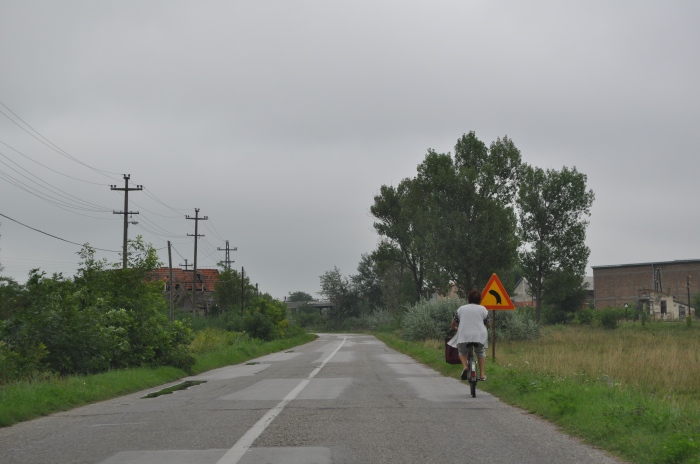 Serbia has a long and extraordinarily complex history that ranges from the 7th century all the way until 2006, when the country became independent from Yugoslavia. Like Hungary (and also once party of the Kingdom of Hungary), Serbia has been a place of medeival power, continuous invasion, and political termoil. Serbia is also the home of one of the 20th century’s great monsters: Slobodan Milošević.

When we were driving we got lost a few times.  First of all, our British GPS does NOT want anyone to drive through Serbia.  It will take you 8 hours out of the way in order to avoid it. So we had to rely on Györgyi’s Hungarian instinct to find her homeland.  We were close several times and even thought we might be able to just sneak back into Hungary on a back road that no one looks after anymore.  But as the road got close to Hungary, it just ended.  Then nothing but expanse of fields and barbed wire. And the river. 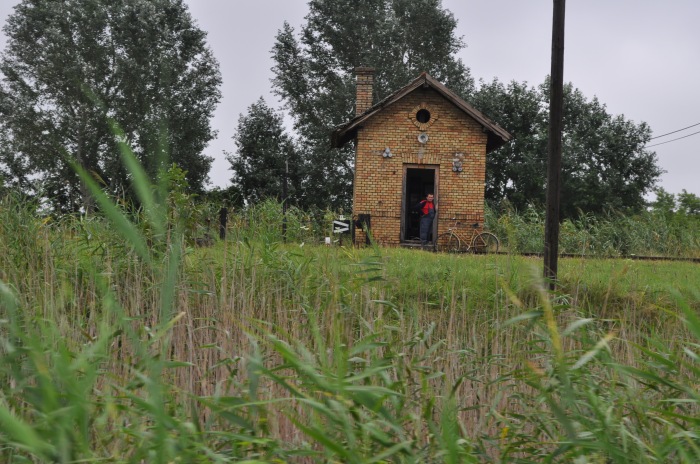 I have a recurring nightmare about border crossings.  I think it is because I was fascinated by East and West Germany right at the time in my childhood when I really started watching the news with my parents at night before bed.  And I still have the same dream.  Being in a foreign, unfamiliar, usually dangerous place.  I’m trying to get across the border and failing or getting caught.  And then running or driving as fast and recklessly as possible, all the while my loud and uncontrolled heartbeat is giving away my position to whoever is chasing me.  Sometimes I’m trying to get someone else across.  When I was little I was trying to get across my little brother. Sometimes he was a baby or his knees were too chubby to run fast. Or my mom who was always losing things along the way.  In recent years its been Györgyi or Bárnabás.  Something on Saturday really triggered that old panic in me again.

We went through a few small towns and a gas station attendent spoke Hungarian so Györgyi could ask the way to the nearest border crossing that might not have such a long line.  We went and waited for 30 minutes.  When we got to the border, the Serbian guards didn’t let me out.  My heart was beating and beating. 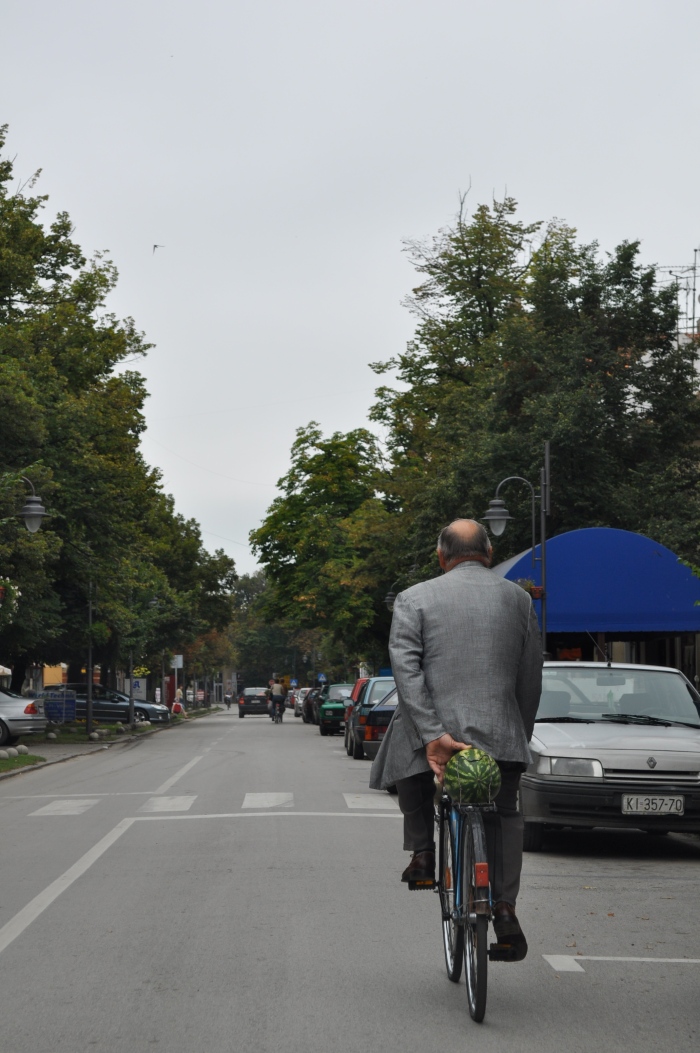 So we headed back to the long line at the main EU crossing.  On the way, we saw many characteristics of village life. Bicycles, tractors, and a train station that was only large enough for 1 or 2 people to wait for the train.  Even though it was just 10 km from Szeged, it seemed like a totally different world.

Last year in Salzburg I met a couple who went to Kent State. They were living in Belgrade as part of a US government team (are now too, I assume) and we chatted for a few minutes about Serbia and the crossroads of Central and Southeastern Europe.  They said that even though Serbia is trying to pull itself out of the traumas of the past, having recently applied for membership in the EU, the capital city is still strikingly gritty. And maybe if I had been in a better mood, if I hadn’t been worried about getting denied re-entry and having to sit for three hours in the main line, we would have just gone to the market, visited a little lake, and headed back to Hungary with a much different impression of Serbia. But it still didn’t feel like Europe. And not in the same way that Croatia doesn’t feel like Europe. I don’t want to use a word to describe it that will be misconstrued as being negative, so I think I will just borrow from a fellow ex-pat with experience in Serbia.  It was gritty.

Györgyi was growing up in Szeged when the war was going on so close to home. She was in her teenage years then, and the fighting came very close to the border. I asked her to describe her experience, which is what is transcribed at the beginning of this post. I remember the war too, but only on television. And only as flashes of light streaking across the sky and President Clinton sitting behind his desk and explaining the positions in his slow, southern drawl. The comfort of distance.

We finally made it back to the EU border and the guard asked Györgyi in Hungarian if the American lady had ever experienced something like that crossing. She answered no.  And I think I felt kind of stupid and a little ashamed. Like as the American lady in the line of thousands of people, I was somehow more delicate than anyone else, more unprepared for the truth about borders and their significance. Getting in. Going home. But I’m trying to make up for it, I hope, by learning what I can and talking to people who lived through it and around it. There’s a great book of poetry by Lee Peterson called Rooms and Fields: Dramatic Monologues from the War in Bosnia.  I highly recommend it to anyone looking for some voices of this region in a not-to-distant past. After my experience on Saturday, I think I’ll read it again too.