Subotica, Serbia is just across the Hungarian border and about an hour from Szeged. I’ve been a few times to the actual city, which is quite nice. You can see and read about it here. But a few weekends ago, Györgyi and I, accompanied by our two friends Edi and Gabi, went to Subotica not for touring or photographing, but to shop. 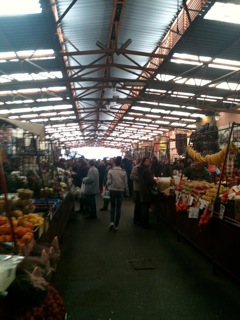 The main attraction of Subotica is really not the city but “the market”. Calling it the market, which everyone does here, doesn’t even do it justice. It’s a massive flea market/food market/knock-off bonanza.

In a lot of EU countries, such as Italy, it is illegal to purchase fake goods. This summer when we were in Florence, we couldn’t avoid all of the signs reminding us that if we did purchase a fake good, we (not the dealer) would be spending several lovely siestas in an Italian prison.  But Serbia ain’t Europe, baby!

As you can see.  You wouldn’t confuse real for fake here anyway. Highlights include the Nike: Express Yourself slogan and the fabulous Guci and Luis Vutton bags. But for $2, who’s counting correct letters? 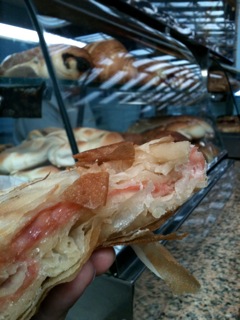 As usual, the highlight was food-related and it was in the form of the Burek. It’s kind of a cross between a meat pie and a savory Baklava. First of all it was HUGE–layers of phyllo dough stuffed with cheese and ham. The snack was pretty popular throughout the Ottoman Empire and is still really popular today in Serbia. It was sinfully delicious as well.

And even though Gabi almost caused us to get turned around at the Hungarian boarder when she casually insulted the customs agent, I got my passport stamped and we all ended up having a really fun day. So fun, in fact, that we’re already planning a return trip this summer.

3 thoughts on “The Serbian Market”