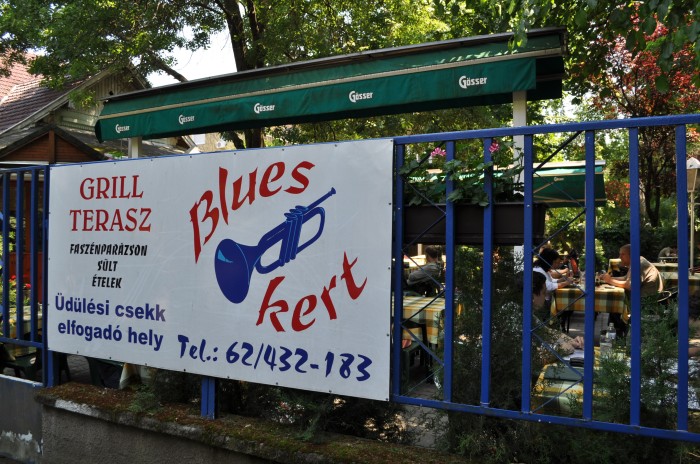 This Wednesday Györgyi and I went to Blues Kert (garden) for the daily lunch menu. The weather has been so nice, and we wanted to eat outside, so at the last minute we remembered Blues Kert. It’s in Újszeged (New Szeged) and just a few minutes from where we live. We had been meaning to go back to this nice little grill terrace ever since last summer, when we attended a wedding reception there for one of Györgyi’s closest friends, Julia.

The first course that day was a tomato soup with little square pocket noodles. I don’t know if it was homemade soup or not, but it was very delicious. Not too heavy or creamy, and just the right amount of sweetness for lunchtime.

The second course was a simple chicken breast seasoned with paprika and maybe a little salt. This isn’t the best picture of the plate, but I had to include it to show my Mom how tan my arms are getting. She’ll be proud.

Even though the chicken breast suffered the usual Hungarian culinary sin of pounding chicken breast as thin as paper, it was cooked well and had a great flavor. And typically I’m a critic of chicken breast dishes here and almost never order them because in addition to thinness, they’re usually very, very oily. This one was not oily however–not at all–which made it a pleasure to eat.  The chicken was served with a big pile of delicious potatoes. They were boiled then smashed with butter, parsley and salt. I restrained myself from eating the whole pile and just ate half, but I could have easily eaten all of them. And probably another bucked-sized bowl. 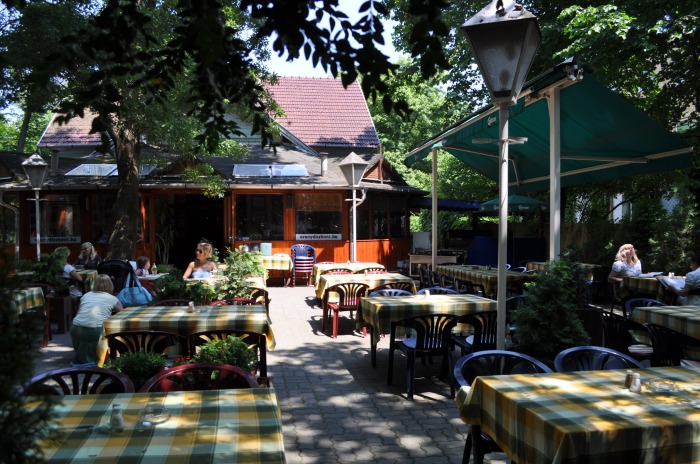 We went to Blues Kert around 11:45, which is early for lunch. But by the time we left, the terrace was filling up, and almost everyone was ordering the daily menu.

In addition to the daily menu, we each ordered a diet coke. The daily menu was 900 HUF (5 USD) per person and the coke was 300 HUF (1.60 USD). The menu price (900) is a little higher than other area restaurants, such as Szeged Etterem, which is about a buck cheaper and where you will also get complimentary water. But for $7, it’s a pleasant lunch outside.

We’re going to go back soon for dinner. As we were leaving one of the cooks was firing up a giant charcoal grill, which is a very good sign since I almost never see or eat food that is cooked to order on a real barbecue grill.