Györgyi and I just got back from a week in Nessebar, which is a little beach town on the Bulgarian Black Sea. Though Old Nessebar is a World Heritage Site, New Nessebar’s “South Beach” area is relatively modern resort town. We stayed at the Mirage of Nessebar Luxury Apartment Suites, which were actually very nice apartments right on the beach, adjacent to the Mirage Hotel.

We had a relaxing week lounging at the pool, exploring the town and nearby resort areas, drinking Bulgarian wines and beers, and at least trying to prepare some local food in our kitchen (we ate some kind of lamb meatballs from the local shop that were insanely good!)

Though Bulgaria is a bit raw compared to Western or Central Europe, the staff at the Mirage was incredibly nice and accommodating. The driver who ferried us to and from the airport told us that over half of the guests are Russian, and most of the rest are Bulgarian, Norwegian and a few Brits. If you’ve never spent an afternoon at the seashore with a hundred or so Russians, well, I’ll just say it’s quite colorful for a somewhat reserved American! In the larger resort areas, like Sunny Beach, there is a perpetual Spring Break quality mixed with that somewhat icky post-Soviet free market gold rush feeling. But this can be avoided by staying at a hotel outside of Sunny Beach, such as in Nessebar, or somewhere along the northern coast. 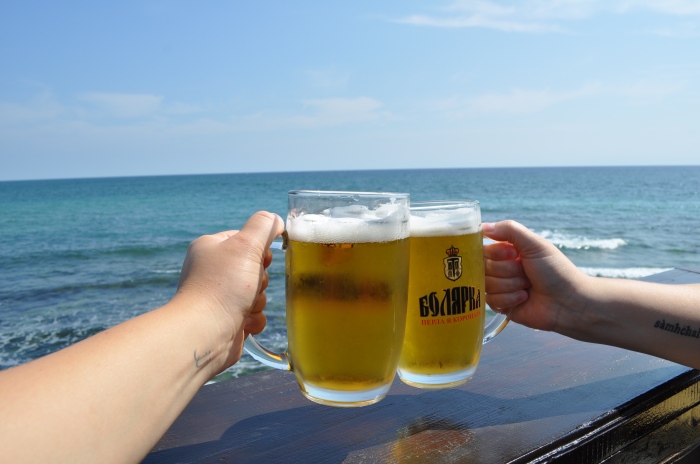 The trip itself was quite inexpensive. The apartment was only 50 Euros a night and the local currency, lev, buys you a little more than a dollar would on a vacation to many resort towns in the US (which is great if you live in Europe and are spending Euros or Pounds). And the drinks were pretty cheap. The two beers above cost a total of 5 levs, which is about 3.50 USD for the pair. One important tip: if you do book a trip to the Bulgarian Black Sea, avoid the tourist clog by visiting in early June or early September. 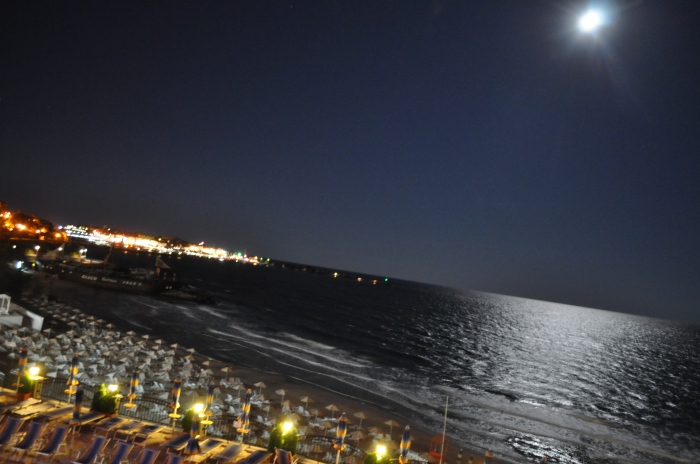 Though we’re glad to be back home, we had a really unique and relaxing time in Bulgaria. The trip highlights included the great air-conditioned apartment, the Bulgarian version of crepes that were filled with Nutella, the Byzantine ruins of Old Town, an ice cold Kamenitza at the shore, and on the last night, the fat Harvest moon rising over the Black Sea.

Click below for a video collage of our escapades!

5 thoughts on “A Week in Nessebar, Bulgaria”