Since arriving in Budapest, a lot of people have asked me about the food.  What I eat, where I eat, and how to make the traditional Hungarian recipes.  While the first two parts have been easy to answer and document, the third, how to make, has gone unanswered until now.  Therefore, I’m going to start posting one Hungarian recipe how-to a week.  Of course all I am responsible for is the transcription, because Györgyi, the actual Magyar, will be doing the cooking.

Almost everyone I know (especially in NE Ohio) has a Central/Eastern European grandmother, cousin, butcher, friend, next-door neighbor, fish monger, etc., and has some working lexicon for the region’s food.  The former Eastern Bloc states have quite a rich culinary history, and combined with the storytelling tradition of Central and Eastern European immigrants in America, it’s no wonder that the food of the region bares a sense of nostalgia for a lot of people.

Gulyás Leves (Goulash Soup) is one of the most quintessentially Hungarian recipes, and therefore a good place to start. Gulyás (pronounced goo-yash) is the Hungarian word for a cattle herdsman.  During the Middle Ages, herds of cattle were moved through the Hungarian Great Plain (Hungarians were some of the original cowboys, after all), and during the trip, one cattle was killed to feed the men who prepared the soup in a kettle over an open flame.  Later, when the Holy Roman Emperor and Hungarian King Joseph II started to bring reforms and Germanic traditions to Hungary (even changing the official language to German, for a time), the people of Hungary began to fiercely hold onto their national traditions. Gulyás Leves became one of the foremost symbols of the Hungarian culinary tradition, and is still popular and fashionable today.

Unlike what some people think, Goulash is not a stew.  It’s not thick.  Instead it is a richly flavored, but fairly simple to make soup.  Including preparations, the total cooking time is around two hours.

Here is what you need: 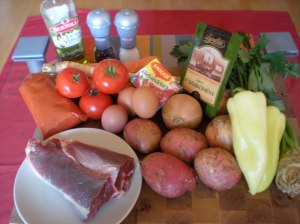 1 cup of dry red wine, 1 onion, 2 tomatoes, 2 sweet peppers, 1 1/2 pounds of beef shank, 2 carrots, a bunch of parsley, a small celery root, Hungarian paprika, beef stock, olive oil, cumin, salt and pepper.  (And flour and eggs if you want to be really bad and make dumplings.  I know you want to be bad.)

I will include a pdf version of the recipe so you can easily download and print it.

8.  RETURN TO HEAT
9.  Add ½ cup of red wine & ½ cup of water to pot (or enough to cover meat and vegetables)
10.  Cover and cook on low heat for 1 hour stirring occasionally 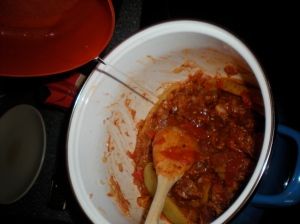 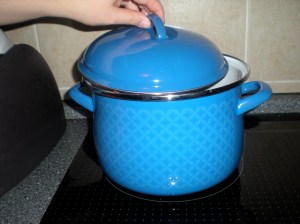 11.  While simmering, peel and dice carrots, celery root, and potatoes
12.  After 1 hour, add diced vegetables (and parsley tied together so you can take it out at the end)
13.  Add 1 cup beef stock and enough water to cover and come above contents in pot
14.  Stir, and re-cover
15.  Simmer for an additional 30-45 minutes 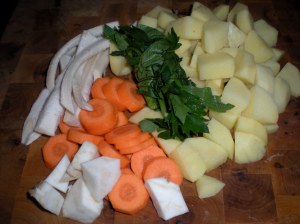 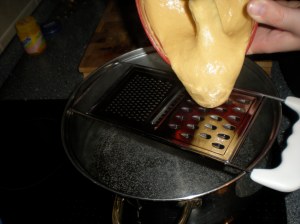 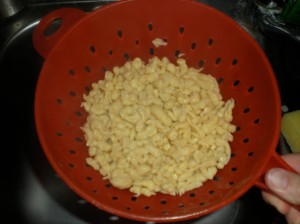 17.  Taste soup, you may need to add more salt
18.  Remove from heat and serve alone or with dumplings

Now remember, ultimately this is a cowboy meal.  So if you don’t have red wine or beef stock or a parsley root, the world isn’t going to end.  If you want to cut your vegetables into neat and equal squares (mom), more power to you!

2 thoughts on “How to Cook Gulyás Leves (Goulash Soup)”