The owner of the company (Makrai Futár) who organizes all of the drivers for Györgyi and her BIG OIL friends and colleagues is also named Barnabás.  I write “also” as if our Barnabás holds the patent on the name.  But the human Barnabás is a great guy and even helped us move into our new apartment.  And at Christmas his wife made gingerbread cookies in the shape of taxis.  So cute.  Anyway, he is learning English, and once he was practicing with an English tape while driving Györgyi and Zsolt to Szeged.  (For you second language learners out there, you know how ridiculous and terribly unuseful those language tapes are at giving you practical phrases.)  So Gy and Zs overheard Barni in the front of the car in studied recitation: “I can see the warning sings of a big storm blowing up.”  They joke about it often, applying their best Hunglish accent, and have used this phrase in relationship to just about everything imaginable, except when it’s needed– because who would ever say that, right?  But for some reason when I was thinking of how to start this post, thinking about the bridge fair and the mega-storm that happened a few hours later, the only thing that came to mind was I can see the warning signs of a big storm blowing up.

On weekends during the summer, the Lánchíd Bridge closes to car and tram traffic and opens up for craft stalls, food and drinks.  Last summer we went a few times, especially when walking home from one of the bars or cafes, as we always had to pass through on our way back up to the castle district.  We hadn’t been this summer and were expecting similar mayham last Saturday.  It was really shocking how few people were actually there.  We didn’t think it was that hot at midday and 100 degrees to keep dedicated tourists away.  But then we were told by the earing lady (who was a little nutty) that there was a huge storm on its way and they were planning on shutting the bridge down early, as to not repeat a tragedy of a few years ago during the August 20th fireworks display when the government didn’t shut down the festivities and a huge storm came through and a bunch of people were struck by lightning and killed. 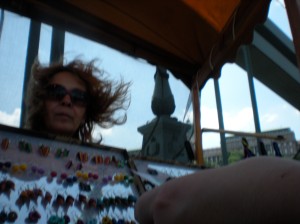 Her hair was warning sign enough.  The wind dashing up the Danube was so strong that at its highest gusts even our stubborn little Barnabás had trouble standing and walking. 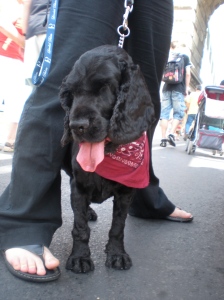 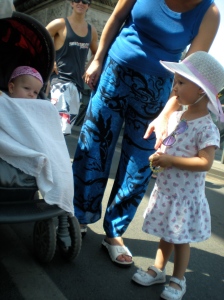 But we figured we’d stay a little and enjoy browsing through the stalls without being interrupted by thousands of other people.  There’s not usually anything terribly special or even all that Hungarian there.  Things you find at a lot of crafty stalls in Central and Eastern Europe.  But the atmosphere is always really nice, and on a Saturday afternoon, it’s a cheap way to kill time and people-watch. 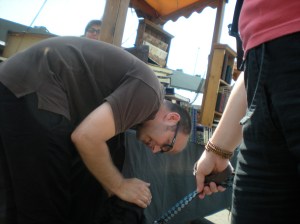 But between people stopping to admire Barnabás, everyone was a little bit wary of when the storm was going to arrive.  You have to understand that it really does not rain here in the summer.  Really, it’s almost always sunny during the summer, which has been such a shock to me as an Ohio native.  So when a storm is coming, people get ready for it.  Because when it rains, it really rains. Not quite as bad as when I lived in Georgia and folks stocked up on milk, bread and batteries when there was a forcast of freezing mist or a hint of snowflake in the air, but close. 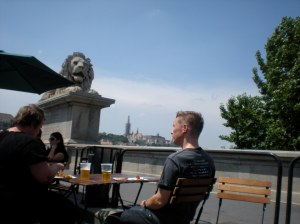 So, we did the responsible thing and bought a few more gifts, a beer of course and a icy elderberry drink.

Then we decided to head off the bridge with the rest of the people who were sort of lazily walking home as well, or back to their hotels.  (In the pic above, you can see the fabulous Four Seasons)

And anyway, the heat was really getting to Barnabás.  As soon as he got a chance, he dashed under the metal arm of the bridge where he found a little dog-sized square of shade, and spilled onto the floor refusing to walk more.  So, that was our final warning sign to get to the Palace (Györgyi’s office) and grab him some water before driving home.

And a coffee for me.  Because I don’t ever refuse a chance to hone my coffee/drink photograph modeling skills.  I’m sure some day it will pay off.  Big time, guys, and you’ll all remember these first pictures, which will be dubbed my “early” period.  Seriously, why do I do this with my head and face when I’m holding a beverage?  I read too many trade catalogs when i was a kid, I guess. 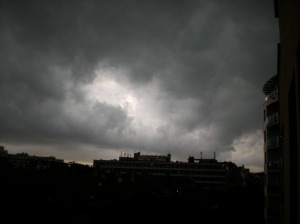 We made it home just in time to see that low-level cyclone forming over the rakpart.  And since we were home, and not stuck on a bridge in the city center (having paid attention) we were able to actually enjoy that big storm blowing up all around us.