The great Hungarian poet, Petőfi Sándor wrote in “The Hungarian Squire”,  There’s one art where I excel:/ Eating well and drinking well… I’ve always wondered, where was this squire eating so well? And I think I finally found the answer to that question this summer. In the face of a region that has somehow lost so much of the traditional delights of cooking and sharing meals, something remarkable happened: a new grill opened in Szeged, which has become, in this writer’s opinion, the best food in town, if not anywhere in the Great Plain.

Középfölde (Middle Earth) is located in Erzsébet liget right inside of the entrance to the open-air theater. I’m not sure why they chose the name Középfölde, but I think Tolkien would appreciate Chef Csabai László’s attention to tradition affixed to his imagination for reinvention. Györgyike, Andi and I have been several times and my only regret is that I didn’t take my Nikon with me each time to capture the full visual delight of the food. In any event, it doesn’t matter. If you are reading this and are anywhere near Szeged, go to this restaurant as soon as possible. Just don’t take my seat.

The pictures below are not in any particular order. They represent the highlights from the several meals that we have had at Középfölde over the last month.

1. Traditional gulyás soup. This was a truly old-style and proper gulyás. Beef and its offal mixed with a broth that was the essence of patience-to-perfection. Yes, you can order a goulash almost everywhere in Hungary, but after tasting Csabai László’s, I think that restaurants that aren’t making it like this should have to call theirs “kind of like  gulyás” or “almost gulyás”. A true, homey delight.

2. Pickled freshwater bream. One of the servers brought over a complimentary sample of a pickled bream. It’s a very ugly (but delicious) fish that lives in the Tisza. It had a bright, briny flavor that  awakened my taste buds for the following courses. 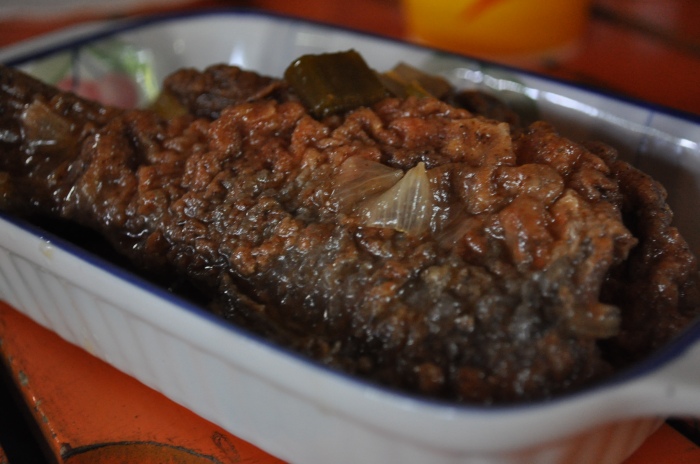 3. Swiss chard casserole. This dish was a real surprise. In addition to the chard, there was rice, layers of seasoning and fresh cheese baked on top. One excellent thing about this grill is that they always have a vegetarian dish. True hardy vegetarian dishes too, not like fried cheese and french fries but healthy, filling pots, such as this one.

4. Chicken Cesar Salad. This was a nice, light, summery salad with homemade croutons. I especially appreciated how the salad was served in a little plastic bucket with a tomato garnish. Very playful.

5. Summer pea cream soup with mint.  Served in a bread bowl, this soup was utterly wondrous, sinfully lucullan. Rich but not heavy, this soup has to be among the three best soups I’ve ever eaten in my life, third only to a she-crab on a picnic table in Rehoboth Beach and the french onion at Fairlawn Country Club.

6. Chicken gizzard paprikas with a dumpling pie.  I had never eaten chicken gizzards before tasting these, so I wasn’t totally sure what to expect from the organs. I thought they might be chewy, but instead they were moist and delicate. The flavor is similar to a piece of dark meat, but more gamey, though not as strong as other chicken offal. One traditional way of serving paprikas is with dumplings or noodles, and what better way to serve them than in a pie. Very inventive.

7. Homemade Hungarian truffle sausage. These homemade sausages, served with fried potatoes, were really lovely. They elevated the typical sausage to something rich, delectable and surprising. I had to smile at these, honestly, because when you think about sausage, you don’t really think bourgeois. But these somehow were, while at the same time maintaining that attention to an older style. A fresh idea executed perfectly.

8. Chilled tomato soup. The night that we ordered this, we had rushed out of the open-air theater ahead of the mass of people headed for the bar at intermission. The night was uncomfortably hot and this chilled, spicy soup with croutons was the perfect start to our meal.

9. Transylvanian sausages.  These sausages had a strong, burly flavor that was perfectly balanced by the cream sauce and the crisp side of greens.

10. Hortobágyi palacsinta in a pot. This meal was a cute play on the Hortobágyi palacsinta, which is a traditionally a meat and spice-filled crepe. Chef Csabai László’s version is served in a pot, layered with crepe, meat and filling and a baked cheese on top. You can’t really tell from this picture, but it was more than enough for two people. 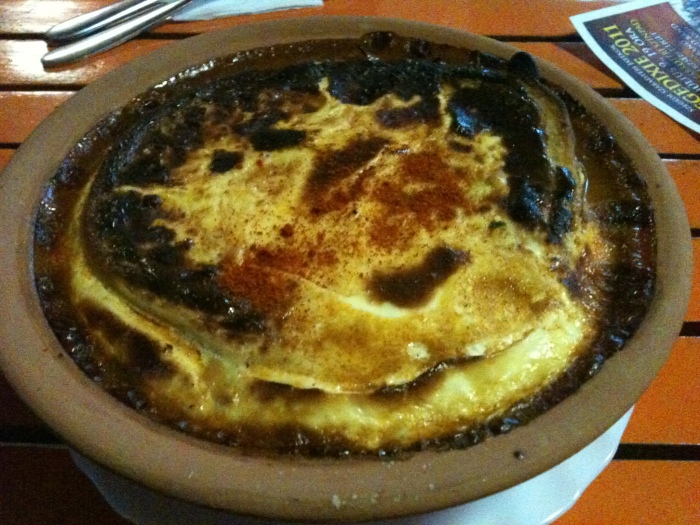 11. Poppyseed bread pudding strudle with pumpin and white chocolate. I think that the name of the dish is basically all you need to know about this luscious dessert. This is another wink to tradition, as the poppyseed bread pudding, known here as Mákos Guba, is a popular Hungarian desert. To make it into a strudle, then pair it with pumpin and white chocolate is an eccentric kind of culinary genius. Nagyon Bravo! 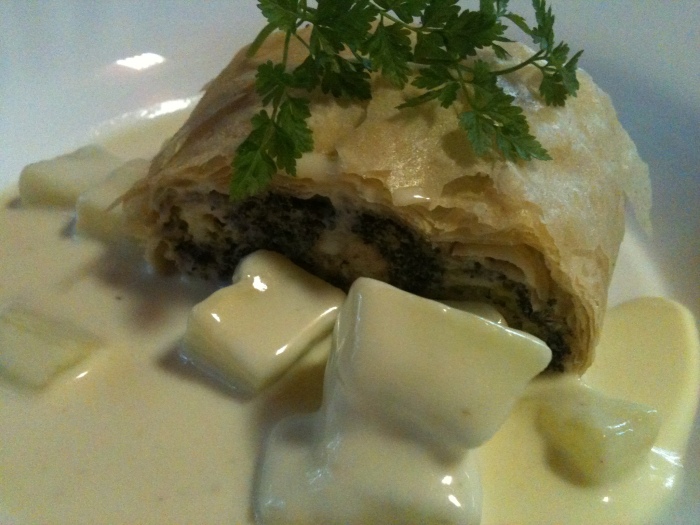 The strudle came with a forrest fruit ice sorbet. I wasn’t sure if it was designed to be eaten with the strudle or separately, but once Gyorgyi got her paws on the strudle, I was left with the sorbet anyway. It was charming, and brought me right back to an American childhood summer with homemade icees at the pool.

12. Drinks. The grill has a full bar with various imbibements. They have Kronenbourg 1664 Blanc on tap, which is one of my favorite French beers, and the bartenders can make a quick wine spritzer for light summer sipping. 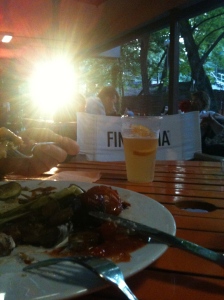 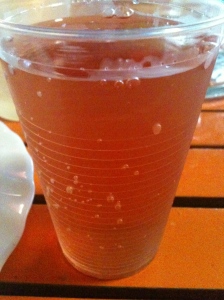 The grill is built right into the park with mostly open-air seating and some seats under an awning. There are tables, lounge chairs and picnic tables to chose from, in addition to fusball, pool and darts. And on nights when there is not a open-air theater performance, bands perform and a DJ spins into the wee hours. The first time we were there, the DJ was playing old-school 90s rap. They hooked me right from the first beat box.

On nights when there are theater performances, expect a crowd, though as long as you don’t try to order food or a drink during intermission, you shouldn’t face too much of a line.

Though you go through the ticket booth to get into the grill, you don’t have to have a ticket to the show to eat and drink at the restaurant. And on show nights you will be treated to the sounds spilling off the adjacent stage. 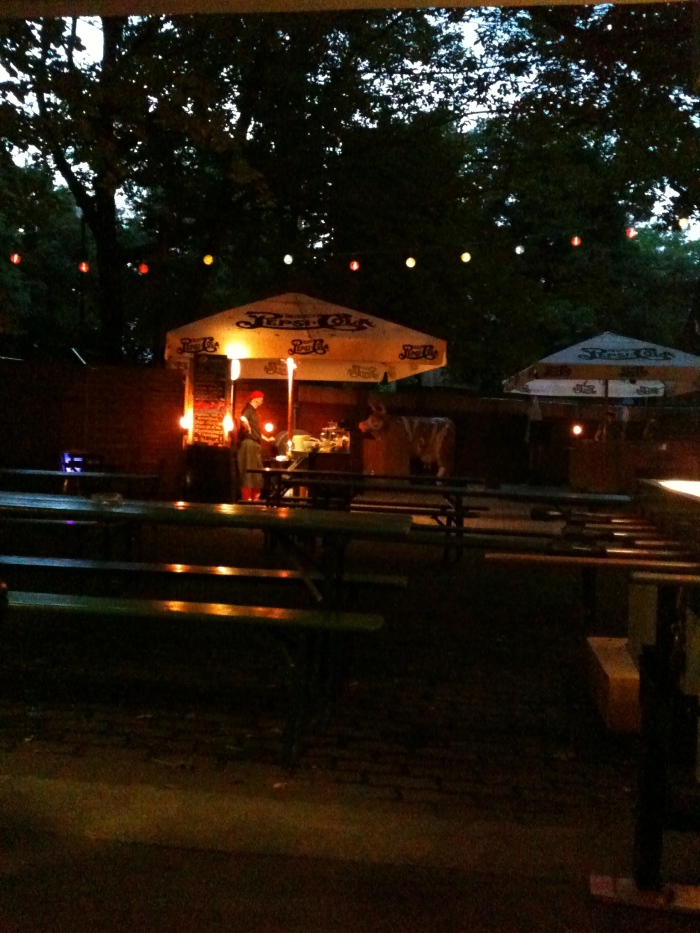 Simply walk right in and follow your nose to the tiki-lit grill stand where you will probably see a man in a red beret. This is Chef László, the culinary maestro of Középfölde. 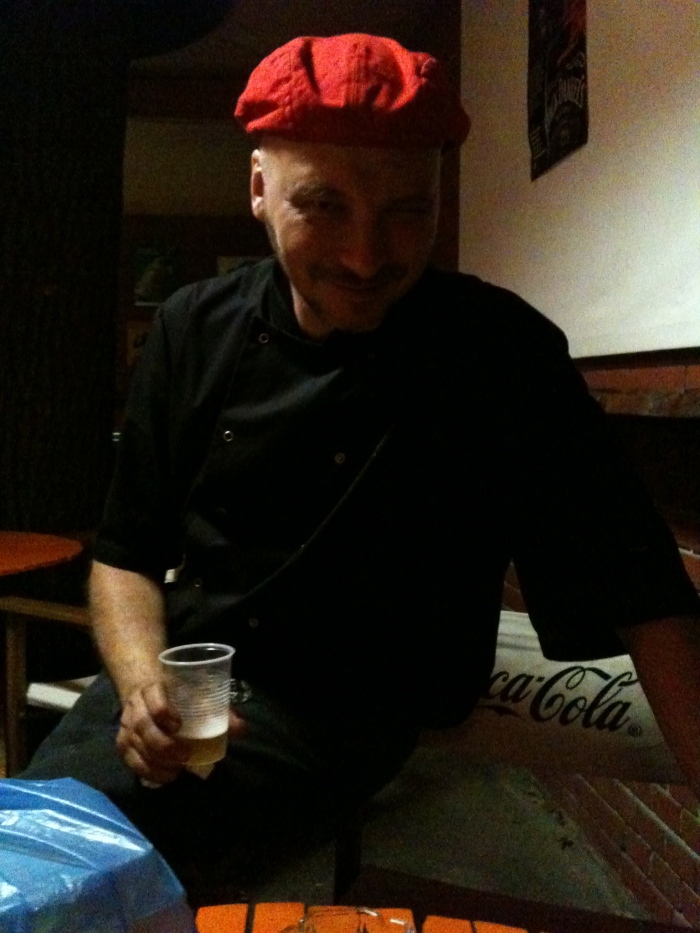 When you meet the man, shake his hand and thank him for returning a little wonder to culinaria Hungaria.